Ringo Starr and his All Starr Band - A Concert Review

I saw Ringo Starr and His All-Starr Band in concert on September 7, 2018, at the Fox Theater in St. Louis, Missouri.     This was the 5th time I had seen Ringo in concert, and this was by far the best one I had seen.    The entire band was full of energy, and they all sounded amazing.    There was a wonderful feeling of peace, love, and music everywhere and I believe the band fed off that and gave the audience a performance that won't soon be forgotten.


This year's All Starrs included Gregg Rolle (Santana),   Steve Luthaker (Toto),  Colin Hay (Men at Work),  and Graham Gouldman (10cc).    These rock stars were really well received as they performed their biggest hit songs.    The song, "Africa" is a BIG deal of a song right now, so it was no surprise that was a fan favorite.   "The land down under" was another one that audience enjoyed, especially when Colin Hay started to dance a little jig.    The unsung hero is Warren Ham, who plays every instrument you can think of perfectly.  From saxophone to flute to various keyboard and percussions instruments, Ham nailed it each time.          I enjoyed most of the All Starr's songs.  However, as I have always said, it is so difficult for me to pay attention to the other songs with Ringo playing drums on the same stage.  I find myself staring at Ringo playing the drums and losing track of the song.


The main reason for this concert was Ringo Starr, and he also did not disappoint.   Ringo was so full of energy.   His voice sounded really good and pretty strong.    He sang many of his expected hit songs:  Yellow Submarine, It don't come easy,  Boys and Photograph.    I was most pleased to hear him sing his song on the Rubber Soul album, "What Goes On."     Other highlights from Ringo include Don't Pass Me By and You're Sixteen.

The only thing I really found wrong about the show was that Ringo seemed to start on the wrong note on "I wanna be your man" and the first part was out of key.  However -- he seemed to pull it back on track once the other guys started singing with him. 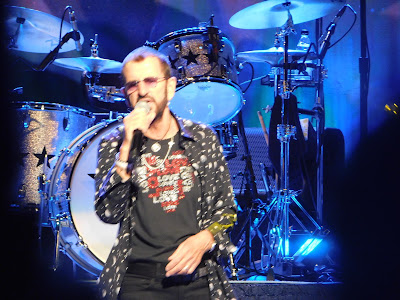 I know that Ringo's tour is still going on.  If you were on the fence on if you should go or not, I want to tell you that you really need to go.   If you haven't seen Ringo in a long time or never at all, then you especially need to go.    This is a must seen show and you don't want to miss out.