After seeing one of the most electrifying concerts ever, the gang and I walked to the Adelphi Hotel where we had hoped of getting into a McCartney party.

At first, we thought it would be easy but then it seemed like everyone had the same idea.  Luckily we were already inside standing near our only refuge -- the john.

Finally, after about a half hour wait, Paul and the band arrived.  Just before he did the security guard locked the revolving door so the mob would stay outside.  Seeing how Paul didn't know this he, Jimmy, Denny and Joe got stuck in the revolving door trying to get inside.  They were being pushed against the glass by fans.   So I ran over and pulled down the bolt holding the door.  I got thanked by Paul, ut almost killed by the guard who was more interested in being proper than reasonable (He said it was Paul's fault for not using the back door.)

The party was on the 3rd floor and we were in the lobby.  So close but so far.  That's when Steve and Howie asked the girls to have a drink I went investigating.  When I got near the room where the party was I ran into Joe English who was in the hall directing the little kids to the washroom.  He recognized me from a couple days earlier when I showed him some shots from New Orleans.  He told me to come in, but I said I didn't want to impose, and that I felt a bit embarrassed peaking.  That's when he said most of the people didn't even know him, and one more stranger wouldn't hurt.   So we went in and helped ourselves to refreshments, cold cuts and salads buffet style in one room and booze in the other.  I felt like I was on the "James Paul McCartney" special (Part II).  Itw as very much like that party on the show with people talking and drinking and sometimes singing.


Finally, I saw Paul dashing from room to room trying to give as much of himself to each cousin and aunt and uncle as he possibly could.  Occasionally he'd go over and say something to Mike or pose for photos with one of his cousins.  He really seemed like he was enjoying himself.

Once he walked by me and said, "Glad you could make it," and he really meant it.  Not like other people who'd say, "how did you get in here?"

I don't remember how I got into a conversation with his cousin Kate who told me Paul would be producing a record for her after he finishes the American tour.  It seems as though she does have some talent because two weeks earlier she sang back-up on Mike McGear's TV spot.

Paul didn't stay at the party very long.  It seemed as though Linda wanted to leave.  Stella was having fun under the buffet table pounding on everyone's toes and Heather Mary and dozens of cousins were playing in the hall until Linda had Heather round up the kids.  Heather asked me if I had seen Stella because they had to leave.  She really was disappointed.

After Pau left I talked to Mike and Angie about the "McGear" album, met Rose (Paul's housekeeper), also talked to Denny and Jojo Laine and dozens of aunts and cousins.

The party ended about 2am when the booze ran out.  By the time I left, I felt as though I was part of the family.  Everyone had made me feel welcome. 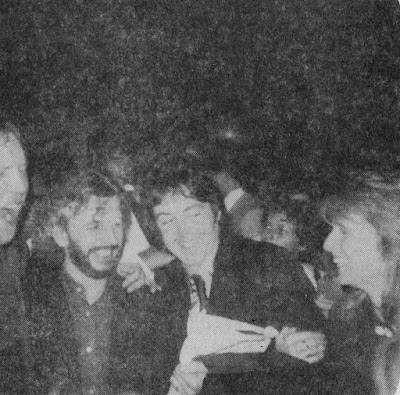 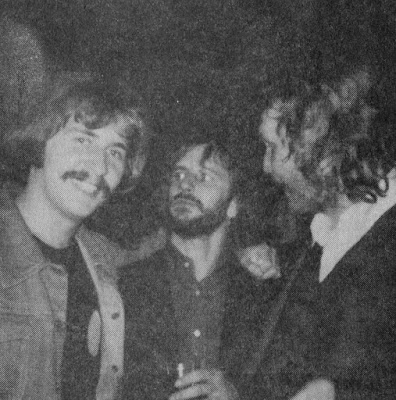 When the London show ended I tried to make my way back up to the balcony to find Cindy, Mary Ann, and Barb but they had already left.

As I was leaving I saw Ringo and his kids near the front row of the balcony.  He sent the kids off with someone and started looking for Harry Nilsson.  To keep from getting kicked out, I went over to talk to him.  I told him I had some shots of him from Elton's rehearsal in L.A. and some from Moon's birthday party.  That's when he said he wasn't at that party.  Then I insisted he was.  He replied, "That night I was so messed up, I really wasn't all there."


As Harry came over he asked if I was going to the party.  I said sure, but actually, I didn't really know where it was.  (Ringo saw my Venus and Mars shirt and thought I was a roadie).

The party was in the balcony lobby.  The guard at the door at first wouldn't let us in.  He told Ringo e needed to show an invitation.  Ringo said, "But he's my friend, Paul McCartney is my friend."  But the guard kept insisting he needed an invitation until someone told him this was Ringo Starr, one of the Beatles.  I thought the poor old guy was going to die!  He got very apologetic.  Ringo told him Harry (who was also being given a hard time) another couple and myself were all with him.

Immediately after thanking Ringo I got myself lost in the shuffle until all the concert goers were out of the balcony.

Walking through the crowd I recognized a lot of people.  Alice Cooper, Pete Townsend, Gary Glitter, David Front, and a few other English artists were all there.

When Paul arrived he talked first to Mr. and Mrs. Eastman, and then the other celebrities.  He signed about 50 autographs and posed for pictures with Ringo.

During the photo session, I heard David Frost ask Paul about a TV special, but I couldn't get any details.  For the duration of his stay, he talked to Pete Townsend, Ringo, and Harry.

The group starting singing some old-time songs (We ain't got a barrel of money...) while photographers clicked and everyone tried to get a glimpse of what was going on.

Paul only stayed about an hour and split.  I heard that Paul dropped Linda and met Ringo and Harry at a club later that night.