Here is a Ringo fan story that  was written by Kathy Mohrmann for the October 1979 issue of "With a Little Help From My Friends."    I could not find a photograph of Ringo on the Jerry Lewis Labor Day Telethon (isn't that strange?).  There is a very grainy video of it on Youtube.    I am posting a photo of Ringo taken a month later. 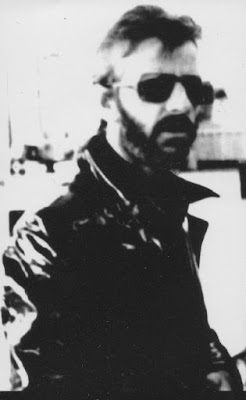 He's the Greatest
By Kath Mohrmann

September 2, 1979 -- I sat down in front of my TV set to watch Jerry Lewis' Labor Day Muscular Dystrophy Telethon at 9:00pm on September 2, determined, like many others to stay up all night if necessary to see Paul McCartney and Wings.  I'm sure we were all happily surprised in the middle of the night to find Ringo Starr jamming with Bill Wyman, Todd Rundgren, Kiki Dee, Doug Kershaw, etc. on "Money" and "Jumpin' Jack Flash"   (wasn't it considerate of them to cut away when they were just cranking up on "Twist and Shout?"  &(@#$!)  Of course, the cameramen didn't show enough shots of Ringo to suit a Beatle fan, but he was looking well and healthy (thank goodness!)

However, that was just the start of a wonderful day for me.  At about 7:40 am (when I was getting very weary, by the way), the celebrities answering the phones in Las Vegas were introduced by Jerry.  and who do you think was there doing his bit?  None other than our hero -- Ritchie!   He talked to Jerry for a minute or two and gave him $100, which I think someone had given him to give to Jerry.  Well, as you can imagine, when I saw Ringo on the phones, my first thought was, "How do I call Las Vegas?"  The local MDA people here in Greenville, S.C., didn't have the Las Vegas telephone number and neither did the Las Vegas operator.  I got kind of panicky right about then and called Ann, a friend of mine from Louisville to see what to do next.  She was going bonkers too.  We decided we might be able to get the number from the Sahara Hotel, where the telethon was being held.  The hotel gave me the number and at 7:55 I hurriedly called it.

The phone rang for a long time before an English accent said "Hello."  He didn't sound like Ringo (might have been Bill Wyman), so I asked if I could speak to Ringo.  Bill said he (Ringo) was at another phone.  Then I said I was calling long distance from S.C., so he said he'd get him.   My heart was beating a mile a minute.  I couldn't believe I was about to talk to one of the Beatles!  I was so nervous I had no idea what I was going to say.  I guess I had thought I wouldn't be able to get through.  As best I can remember, here's what happened.

It seems as if Ringo said something about South Carolina -- whether it was to me or to Bill Wyman I'll never know.  I said, "Hello...Ringo?"  and he said, "Hello?  I can hardly hear you, darlin'."   I felt really funny calling him Ringo; it just sounded strange when I said it.  Then he asked, "What's your name, darlin'?"  I gave him my name and had to spell it twice, which is no unusual.  Then he asked for my phone number - -why I don't know -- but if he wants to call me up sometimes, that's fine with me!  I gave him my address, but there was a long pause after I said, "Greenville, South Carolina,"  so I asked him if he was ready for the zip code.  "It takes a long time to write 'South Carolina'"  I told him he could use "S.C." and he asked, "Would they know what I mean?"  I assured him that the post office would know.  I gave him my pledge, and he commented, "Everything helps."

Right about then,  after all the business had been taken care of, I thought I would probably become a victim of that old "uh..er...uh" language disease we Americans seem to catch from time to time.  But Ringo helped me out by keeping the conversation going.  "Are you enjoying the show?"  I told him I was.  I should have said I stayed up all night to see Paul, but I didn't think of  it at the time (darn it!)  Then he asked, "How did the band sound?"   I said, "It sounded great!  I wish you could have sung a song, though."  He said, "Yeah, well, I was just sort of sitting in," or something to that effect.  Since he'd been so ill a few months ago, I asked how he was feeling, and he said he was feeling great.  I told him he looked really good, and he said, "Thanks, darlin'.  Well, I have to go now, darlin'"  It just knocked me out the way he kept calling me "darlin'"  I had to get something in about George (my fave), so I said, "Say hello to George for me when you see him."  Ringo replied, "I'll see him in 10 days, and I 'll tell him you said hello."  I wonder why he was going to see George?  I thanked him and we said goodbye.

After I'd recovered somewhat from the shock of it all, I called Ann back to see if she'd gotten through.  She hadn't obtained the phone number yet, so I gave it to her.  She tried several times to call, but Ringo was constantly on the phone with other people.  Then he left the stage and neither Ann nor my other friend, Teresa got to speak to him.  I must have been one of the first to try to call Las Vegas, so I was really lucky and got through.  I forgot to ask Ringo if Paul was going to be on the show live, but as it turned out, he only sent a tape of "Getting closer."  Ann and Teresa chided me for not asking about their favorite, John.    Sorry, girls, but I guess my mind doesn't work properly when talking to a Beatle!

On Thursday, September 6, I received my pledge envelope in the mail.  I'm sure Ringo printed my name and address on it himself because my surname was originally spelled "Mormann."  He had to stick an "H"  between the "O" and the "R" and wrote it above.  He also misspelled "South Carolina"-  it came out as "South Caraliner."   As you can imagine, I'm not sending my pledge in that particular envelope!  I plan to keep it and frame it.

Thus, my Labor Day was a wonderful one.  I was just amazed that I was able to get any words out when Ringo came on the line.  He was really sweet and very easy to talk to -- just like al ong time friend.  Thanks Ringo!  "It's a sunshine life for me!"

Email ThisBlogThis!Share to TwitterShare to FacebookShare to Pinterest
Labels: 1979, fan memory, Ringo Starr, With a little help from my friends