Advertising the Beatles a book review 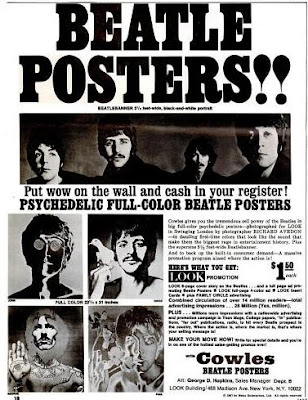 When the author of Advertising The Beatles,  Ray Zirkle,  was a young Beatles fan, he started to save all of the advertisements that he found in Billboard and Cashbox magazine that pertained to the Beatles.   He took care of these pieces of Beatles history and decided to make a book out of his collection.


His book is full of colored photographs of ads for Beatles items in chronological order.   It is a beautiful book and the ad themselves tell a story of the Beatles through what was sold between 1963-1970.   This is the only book I am aware of that features the advertisement in the United States.  Since there were so many products available in the U.S.,  it is a great time capsule.     There are ads for all of their records,  Beatles buttons, wigs, concerts, movies, etc etc.    I especially enjoyed the later years of the Beatles.  The ads for Magical Mystery Tour,  Yellow Submarine,  and Let it Be were really colorful and interesting.   It seems like you will see Beatles ads on Twitter or Facebook from time to time, but they are always early in the Beatle story.   These later advertisements are a lot of fun.

But overall this is a lovely book and one that is worth a good look through more than just once.