The following was written by Jude Vachon and was published in the January 1973 issue of the Harrison Alliance. 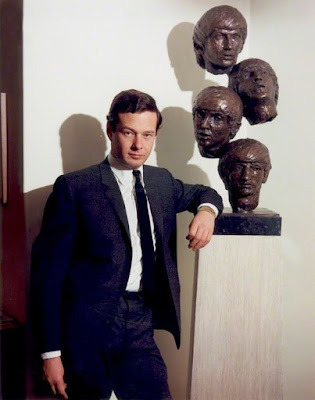 My Nostalgia by Judy Vachon

When it comes to the Beatles, we each have our varied memories.  The happy times of the first Ed Sullivan Show, the sadder times of crises in the Beatles own lives.  But for me, much of my nostalgia centers around on man.  A dead man.  Brian Epstein.

In the last year of his life, Brian was in poor health and heavily into gambling.  Virtually ignored by the four he helped make famous, he died feeling unneeded, unwanted, unloved.

August 27, 1967, fell on a Sunday.  The morning paper had a one-liner about Brian Epstein contributing a few thousand dollars to plant trees for the war dead in Israel.  At noontime, the newsman on WBZ Radio announced: "The chief of the Beatles is gone."

Rosalie and I froze in anticipation.  Oh, God, not John--- please not John...   "Brian Epstein was found dead in London today...."   The deejay, Dave Maynard, made a stupid joke about something and then played "In My Life" by Judy Collins.   I've never forgiven him that laughter.

I was hysterical when I got home:  my poor mother trying to sort out the chocked words.   "Well, who's dead?  Who?"  And then, "But you never even knew him!"

Monday I scavenged downtown for all the papers.  Tuesday it wasn't "news" anymore but a few details leaked out.  Drugs and alcohol.  Was it accidental?   I didn't think so then, and I don't think so now -- five years later.

In 1970 I visited Liverpool and found Brian's grave.  On the beautiful black marble stone is written:


In Loving Memory Of
BRIAN EPSTEIN


Deeply Mourned and Sadly Missed
By his Devoted Mother,
Brother and All His Family.

May his Dear Soul
Rest in Peace.

Let's hope Brian has finally attained some peace.  How different things might have been had he lived.
Posted by Sara S. at 6:42 PM