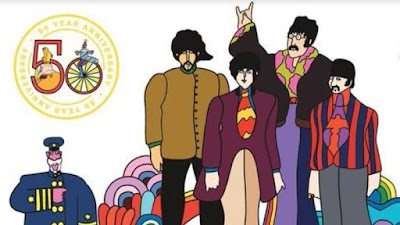 On July 9, 2018, I had the opportunity to see the classic animated Beatles film, Yellow Submarine on the big screen for the first time.     As a Beatles fan, it is always fun to experience a Beatles' movie in a group setting.   It is nice to hear others laughing at the jokes and singing along to "All Together Now" at the end of the movie.


I saw the film at the Tivoli in St. Louis which I would guess seats about 300 moviegoers.   The room was almost filled.   I noticed a variety of ages from first-generation fans all the way down to small children.   Many of us were wearing Beatles or Yellow Submarine T-shirts.  The cutest thing I saw was a little boy holding a stuffed Yellow Submarine and Paul doll.


The general plot of the Yellow Submarine is extremely basic and is just as relatable and relevant today as it was 50 years ago.   The Blue Meanies are doing whatever it takes to remove all of the music and love out of Pepperland and it is up to The Beatles to restore order to the land.     The Beatles are our heroes and we are thrilled that they are able to beat out the baddies with love and music. 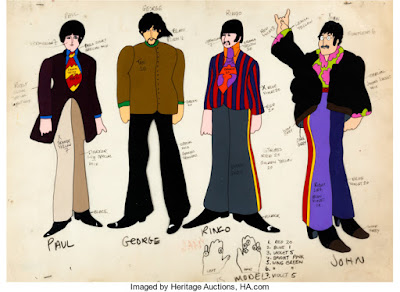 The animation is dated.   It looks very much like the late 1960's.    It is very colorful but the characters are flat.   Maybe I think this because I watch Pixar and Disney animated films that are popular today.  The animation actually reminds me of some of the stuff you'd see on Sesame Street in the 1970's.  However, even with the outdated style of animation, it still seems to work and parts (the sea of holes for example) almost appear 3D in this new release of the movie.

The most disappointing thing about the Yellow Submarine is that John, Paul, George, and Ringo did not record their own voices.     I do not like the voices used for the Fab 4, and I have a hard time distinguishing between the four, especially when they are not on the screen.     I have come to accept this over time, but I can't help but think just how much better this movie would have been if John, Paul, George, and Ringo had made the time in 1968 to provide their own voices.   Thankfully you do hear the REAL Beatles throughout the many great songs that are used in the film.    They sounded wonderful in the 50th-anniversary film and mixed along with the vibrant colors, the music sequences were outstanding and well worth the experience.

The VERY best part is the last few seconds when you see the four real Beatles hamming it up.   I got a kick out of hearing John announce that "newer and bluer meanies are seen in the vicinity of this very theater...."  while I was actually sitting in a theater and not on my couch.

I know the 50th-anniversary showing is still being released in more cities around the globe.  If you were on the fence about going, I do encourage you to go.     I haven't heard if a new Blu-Ray/DVD is going to be released, but it should be.   The 1999 version has been out of print of some time.   Right now the only new things available for the anniversary if a vinyl single.