We went into a dream 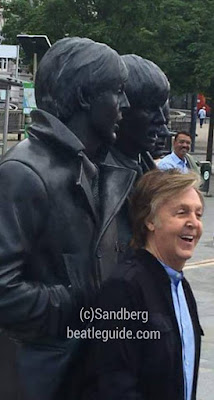 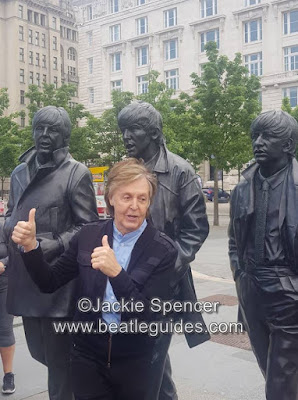 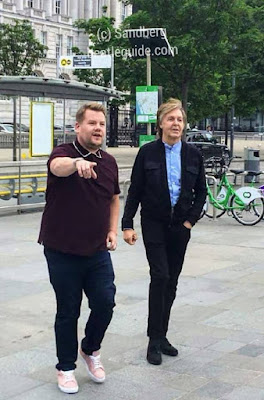 I am sure many of you are like me and have been to Liverpool and went on a Beatles tour.   If you haven't had the good fortune of doing that, it is something that is on your bucket list.    And if you have gone or will be going, you MUST book a tour with the best tour guide in Liverpool, Jackie Spencer.    I have told you all about Jackie before.    She is the greatest because she is a real, true Beatles fan.   George is her favorite.   There is nothing better than going a Beatles tour with someone that loves the band as much as you do.

Part of the tour includes going down to the dock and seeing the extra large Beatles statue.    No one ever thinks they will meet a Beatle on a Beatles tour in Liverpool.    But it never hurts to daydream about it    That dream came true to the wonderful fans that were on Jackie's tour the day Paul and James Corden came into town.    They just happened to have been at the Beatles statues at the right time.     I asked them to share a little bit about what they saw and thought while it all went down.

Hi Sara, it was an incredible moment of good luck for us all! Jackie was just finishing a tour with myself, my husband John (we are from Washington state), my sister in law and her husband (Susie and Nacho Ramirez from California). Since we were all there, here are all of our thoughts, if you don’t mind:Myself:I was thing about the statues and how they must’ve felt leaving their home town. We were leaving Liverpool the next day so Jackie really had us thinking about it. Paul came walking up, I saw all of the cameras and ran across the front of him to get some pictures! I just kept thinking I can’t believe it, I can’t believe it! And I’m pretty sure I squealed a little

John:My initial thought when he hopped out of the car was that I couldn’t believe it and it took my breath away. This can’t be happening I said to myself several times. Susie:Our hearts and minds were completely immersed in Beatlemania having just done Jackie’s tour. Then to be standing at the statue of them leaving, and we were leaving, up walks Sir Paul larger than life! I thought wow! What a fulfilling moment. Nacho:It was unbelievable that he was there in his home town and so cool to be seeing him there in his home town!We also felt like “somebody spoke and” we “went into a dream”!!