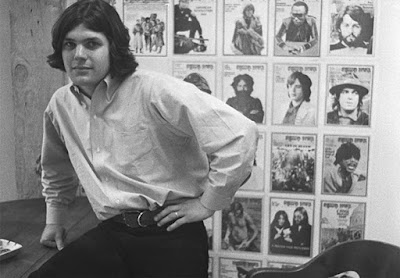 I am sure many of you reading this were like me and at one point had a subscription to Rolling Stone Magazine.   And I wouldn't be shocked to learn that many of you also collected back issues of the music magazine, especially if the Beatles or John, Paul, George or Ringo were on the cover.

I had heard that the biography of the founder of Rolling Stone,  titled Sticky Fingers The Life and Times of Jann Wenner and  Rolling Stone magazine was an interesting book, especially for Beatles fans, so I thought I would give it a try.     I am an extremely fast reader but this 560-page book took me over 3 weeks to finish.   This book is "semi-authorized" in that Jann Wenner asked the author to write the book and was allowed to edit things that were about his personal life, but did not touch what was said about him professionally.

Jann Wenner (the name is pronounced "Yann" come to find out I have been mispronouncing his name wrong all these years) supposedly started R.S. magazine because he wanted to meet John Lennon.   The book starts with a wonderful story of Jann and his wife Jane along with John and Yoko watching the film "Let it Be" almost alone in a California theater in 1970.   This would be the first time John had seen the finished cut of the film and John left in tears.

Jann was a Beatles fan and thought John Lennon was basically the Beatles and the other three really didn't matter.    He loved John so much that he put John as Private Gripweed on the cover of the first issue in 1967.  The San Francisco magazine wasn't doing well financially in 1970 and John agreed to give Jann an exclusive interview with him and Yoko to help sell more magazines (well newspapers at that time).  Part of the verbal agreement was that Jann would not use the interview outside of the confines of RS.     This was, of course, the most controversial of all John Lennon Interviews are known today as "Lennon Remembers." 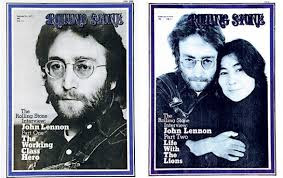 Jann went back on his word and published the full interview in book form.   This made John Lennon extremely angry and he cut ties with Jann Wenner and Rolling Stone Magazine.     In the big picture, the "Lennon Remembers" interview was not a good idea all around.     Wenner didn't do well with the other Beatles either.    Paul didn't like him because he thought that he favored John too much and George didn't like him because of the infamous "Lumbering in the Material World" article about the Dark Horse Tour.      The book doesn't say anything at all about Ringo.     It amazes me that RS was able to become so big without The Beatles support.


The book goes into a lot of detail about Jann's personal life.   It paints a picture of a self-centered, party boy that was addicted to cocaine,  and treated people poorly.    He would sleep with both men and women even though he was married to Jane.    However, I guess it didn't really matter because Jane had her affairs with a variety of men and women herself.     By the time they moved the magazine from San Francisco to New York City,  the Wenner's were living a jet-set rich life and were deep in debt.    In the 1970's they loved to hob-knob with the rich and famous, even though most everyone disliked Jann (they all adored Jane).     Personally, I found this time in the 1970's to drag on and on in this book and it could have been majorly cut down. 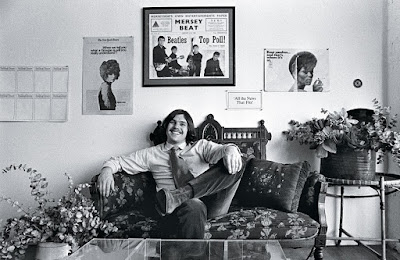 A few interesting things:   In 1974 Jann received a Polaroid photo of John and Paul at the beach house.   The description of the photo given in the book does not match with anything I have in my files.     There possibly could be another photo from April 1, 1974, of John and Paul that we haven't seen!

In 1977, there was a Rolling Stone 10th anniversary TV special that had a Beatles segment that is really messed up!   $100,000 was spent on this segment of the failed show and you just need to look it up on Youtube to get the full trainwreck.   People dressed up as Strawberries dancing around to a guru looking guy singing "Strawberry Field Forever??"   I wonder if John or Paul saw this mess?

When John was murdered in 1980,  Jann was devastated.     Now John had not forgiven Jann for the Lennon Remembers book.   He purposely gave the big interview in 1980 to Playboy and made it clear to Jann that he was allowing RS to do the photos and talk to him just because he needed the publicity for Double Fantasy.      But Jann was a slick guy and after John's death, he became friends with Yoko Ono.    He started going on talk shows and talking about his "good friend John Lennon."    Jann and Jane along with Yoko and Sam H. would go shopping for expensive furniture together and Yoko considered Jann to be a real friend.   Sean even ended up being the Godfather to one of Jann's sons.   And the John Lennon tribute issue of RS with naked John curled up to a fully clothed Yoko is one of the best-known photos and best selling magazines of all time.

The book also goes into detail about Jann's involvement in the Rock n Roll Hall of fame and how Jann lied to Paul McCartney, which is why Stella wore the infamous "about f---- time" t-shirt when her Dad finally was inducted.


Jann was always willing to give new writers a chance and was a good businessman who made a lot of money.    He just lead a crazy life with a lot of sex and drugs.    In 2014, Yoko Ono gave him a peace award in Iceland because she thought he was depressed and that would cheer him up.    Rolling Stone has had its up and down over the years and has gone through so many changes, but it remains still a mainstay when it comes to rock n roll journalism. 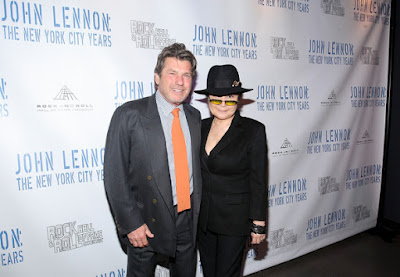 Sticky Fingers was an interesting book, but it was a slow reader.    I would only recommend it to fans of rock n roll that are particually interested in how this classic magazine was ran.