Why did John and George leave the Rishikesh? 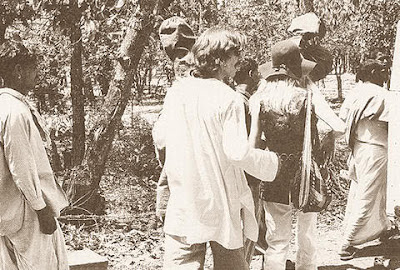 50 years ago today, on April 12, 1968, John Lennon and George Harrison, along with their wives Pattie and Cynthia chose to leave the Maharishi's camp after 2 months.      There are many theories as to why John and George abruptly left the guru and did not finish the program as they originally had planned.


1.   The "official" story -   The story that had been told from the beginning is that the Maharishi had been seen with a young lady from the camp in his private quarters engaging in sexual behavior.  Believing the Maharishi to be a spiritual man that abstained from the desires of the flesh, they were angry by his behavior and found it to be a betrail.    They attempted to speak to him about the issue and he just giggled and did not talk directly about the issue and avoided answering the two Beatles.  This caused them to get angry even more and so they packed up their things and left the ashram.  While they were waiting for the taxi, John wrote a song called "Maharishi" (which of course was renamed and recorded as Sexy Sadie).  The original lyrics really called the Maharshi out on his behavior.

The official story got even more shocking in 1970 during John's infamous "Lennon Remembers" interview with Rolling Stone.    John states that he had heard that the Maharishi had tried to rape Mia Farrow and some other girls and when he and the others went to confront the man about these charges, he gave John "a look" that was telling of his guilt.


2.  Magic Alex -    After many years had passed, the story of Magic Alex's involvement in all of this started to emerge.     Cynthia Lennon talks about it in her book, and it is found in other Beatles books.   According to this theory,  Maharshi never had an affair with any of the girls, but Magic Alex started the rumor that he had.      Alex spread the rumor and made sure George and John heard about the sexual relations between a young American teacher and the guru.  He even stated that the strictly vegetarian man gave the girl some chicken!    The two Beatles were so mad about all of this, they just packed up and left in a huff and never questioned Alex about the story.      According to those that believe this theory,   Alex made up the rumor to get all of the Beatles back to London so that he could get back to work on his inventions for Apple Electronics.   Meditating in India was not monetarily beneficial to Alex and he was wanting to get back to work and get more of that Beatle money.

Alex came out saying that none of this was true except for the fact that he was indeed the one that told the guys about the affair with the American teacher and that the Maharshi even admitted that he was just a man with urges.   Alex continues to say that it really wasn't a big deal because they were ready to leave the camp anyhow.  Pattie and Cyn had gotten tired of meditating and John and George were ready to get back to the studio.   He basically says that they would have left on April 12 regardless of the story of the affair.


3.  John was disillusioned -  This comes from Cynthia Lennon's second book.   She states that later John shared with her that he wanted to leave because he felt that the Maharishi's motives weren't pure, but that he was just like everyone else and was doing the meditation for fame and money.   That he was using the Beatles association with him to gain him more exposure and more money.    They were drawn to him to learn his wisdom and techniques of meditation, but John felt used.

Personally, out of all the theories, this one makes the most sense.   Maharishi did use the Beatles and the Beach Boys and any other famous person to get famous and make money.   Maybe it wasn't his original intentions, but it seems like he got a bit greedy once the rich and famous began to follow him.


4.  They were asked to leave -  There is one theory that doesn't have anything I can locate to back it up that George once said that because of their use of drugs, the Maharishi had asked John and George to leave.     Supposedly George said this in an interview in 1991, but I sure can't find the quote.    It really doesn't make a lot of sense.   I know there was a little drug usage in the ashram, but basically, it was a drug-free zone.    Why would Maharshi ask his two most famous devotees to leave?

According to many different articles, all four the Beatles considered the time in India to be worthwhile and did not hold any grudges against the Maharshi.      Reportedly, John spoke to him on the telephone and apologized for what he had said (not sure if that is true).   In 1991, George went to visit him in person in the Netherlands and had a good conversation with him.     One thing I can say about the Mahrishi is that he neve had a bad word to say about the Beatles.    Many others in is position could have really bad mouthed the guys, especially after John accused him of raping Mia Farrow!   However, he never publically uttered a bad thing about any of the Beatles.