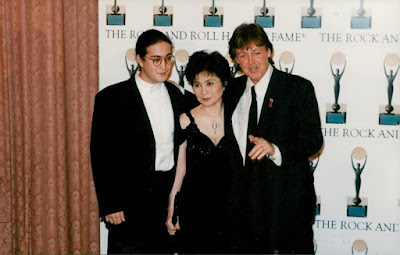 At the time Paul and Yoko being spotted together and getting along at John Lennon's induction into the Rock n Roll Hall of Fame was big news.    Big news!    We had been under the idea that those two were bitter rivals and would never be photographed together again. So when we saw them together and hugging it was crazy.   We didn't know it at the time, but that was when Yoko gave Paul the tapes that were to be used for the new Beatles songs.     I don't recall ever seeing a photo with Sean in it.
Posted by Sara S. at 9:13 PM