The concert for George - a film review 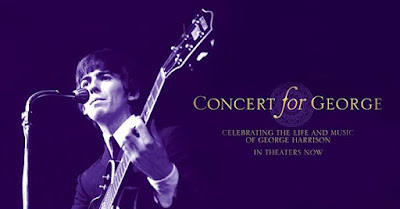 In celebration of George Harrison's 75th birthday, The Concert for George was shown at a few theaters around the United States.     The concert was held on November 29, 2002, at the Royal Albert Hall in London.   It was in many ways a memorial service held for George.     Eric Clapton organized it and Olivia and Dhani Harrison invited George's friends to become involved and perform songs of George.

It isn't every day that you get the opportunity to watch a Beatles film on the big screen, and so when I learned that a theater in St. Louis was showing The Concert for George,  I was excited to attend.   When I got to the theatre and found out that they had reclining seats -- well what more could you ask for?   Kicking back, eating popcorn and watching some of the best musicians playing the music of George Harrison -- my way to spend a rainy Thursday night.

I had only watched the concert one time before -- when it was originally released.   Maybe when I saw it in 2003, it was too soon for me, because I recall that I just found it sad and I didn't have a desire to watch it again.    My feelings had nothing to do with not enjoying the tribute, but just an overwhelming sadness that George wouldn't have wanted a tribute concert in the first place and that he wasn't there with all of his friends.

But the years have passed now and I felt like George's 75th birthday was a good time to watch it again with fresh eyes.   This time I was able to enjoy it for what it has become:   A time capsule of what was going on in Beatles world in the 2000's.     So many of the performers, who were influential to the Beatles and especially George Harrison have now passed away.    Billy Preston, Tom Petty, and Ravi Shankar were the three big names that stood out.    However, through this film, we are able to travel back to the early 2000's and see them again.   We get to see Dhani Harrison for the first time since he was just George's little son and discover that he grew up to be quite a guitarist himself.  We get to see Paul McCartney play ukelele to "Something" for longer than he does in concert and remember that in 2002, it was something new that he had started to do. 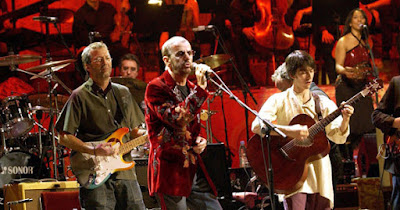 The concert is an amazing tribute to George Harrison.    It really touched upon all of the aspects of George as a person.    The Indian portion reminded us of George's spiritual life and his love for India and the instruments.   The performance of "The Inner Light" was especially lovely.     The Monthy Python Lumberjack Song was a great way to show George's humor and remind us that sometimes George was in the Lumberjack choir himself.    Ringo's "Honey Don't" reminds us that George loved the old rockers.     There really was a great variety of George songs performed from all aspects of George's career, even up to the song he released the year of his death, "Horse to the Water." 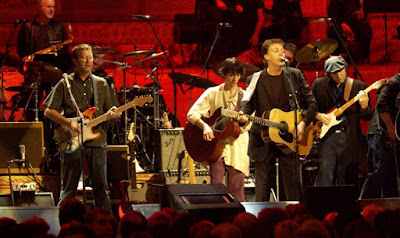 Some of my very favorites were Ringo's performance of "Photograph."    George wrote the song and as Ringo pointed out before he sang it, the lyrics have a different meaning now that George is no longer with us.     I liked Tom Petty's performance of  "I need you."    I was blown away by Paul's performance of "For You Blue."     Nothing can beat Eric Clapton doing his guitar solo on "While My Guitar Gently Weeps."   However, my very favorite was  Billy Preston's performance of "Isn't it a Pity."    I forgot how much I like  Billy Preston.   And while he sang, I thought about how George and Billy experienced a lot together.   They first met in the early 1960's while Billy was with Little Richard and George called Billy to join the Beatles on Get Back and Billy almost stole the show every night during the 1974 Dark Horse Tour.      Billy really put his heart for George into that performance and I am so glad that we have it to remember Billy. 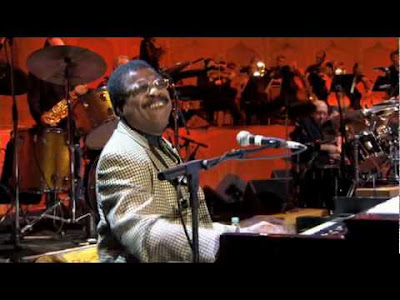 There really was only one thing I disliked about the film.    It was nice that they showed some backstage banter and interviews with individuals about the concert and about their memories of George.  However, there was no need to interrupt in the middle of a song to add these things.   Right dab in the middle of my all time favorite song, "Handle with Care" they cut to Tom Petty telling the story of the Traveling Wilbury's and that song.    Ummm...I already know this story.  I want to hear the song!    They didn't do this on a lot of songs, but enough for it to bother me.


If you have never seen the Concert for George or if you haven't watched it since the original release, you need to watch it again in 2018.    It is a wonderful tribute to an amazing guy -- our sweet George.