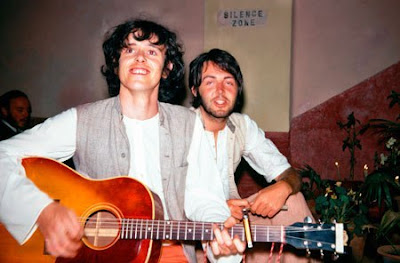 I am still looking through the book "Ticket to Ride" by Denny Somach and finding a few good interviews to share.   They were all conducted in the late 1980's.   Here is one with Donovan .


Q:  When did you first meet the Beatles and what were your impressions?

Donovan:  My first meeting was when Bob Dylan had just got done playing two shows in London.  He was staying at the Savoy and I went to visit him.  His roadie brought me in and said that Dylan was in the back, watching TV.

It was very quite; nobody was around and we arrived back at this tiny little room on the end of the suite.  It was dark, with just a television on, and there was ice skating championships on from Austria.

I sat on the floor, Bobby was on a chair, and we didn't say anything to each other like "Hello," because the best thing for artists to say to one another is nothing -- everyone is always asking questions -- so we never ask each other anything.

Anyway, as my eyes became acclimated, I realized that there were other people in the room sitting on a the sofa.  My eyes became accustomed, and there was John, Paul, George and Ringo.  so our first meeting, we never said anything.

George said later that I was too impressed by them because I was younger and thought I wasn't as good as the Beatles.  He also said that I was, and am, fully a part of their music.  and George gave me a lift in his car and that's how I met the Beatles.


Q:   You contributed lyrics to the song "Yellow Submarine."  Reconstruct that.

Donovan:   Paul came around to my apartment and parked his Aston Martin in the middle of the road with the door open and the radio blaring.  And he walked away from the car.

He came up to the apartment and was playing me "Eleanor Rigby" with different lyrics, and he also said he had another song that was missing a verse.   It was a very small part, and I just went into the other room and put together "Sky of blue, sea of green."

They had always asked other people for help with a line or two, so I helped with that line.  He knew that I was into kids' songs, and he knew I could help.  I'm sure he could have written the line himself, but I suppose he wanted someone to add a line, and I added a a line. 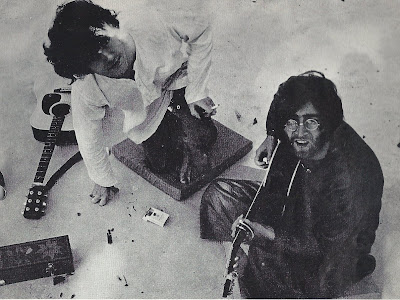 But more importantly, in India, I introduced John Lennon to a finger-picking style that I had learned with great difficulty.  There were only three folk singers in England who played this style at the time, and any time I tried to learn it from them, they refused to play it, which I thought was terrible.  But I learned it from this one guy one day and I taught it to John and he taught it to George.

When John learned a new guitar style, he usually wrote a new song.  With this style he wrote "Julia" and "Dear Prudence."  That finger style that John plays on The White Album is the one that I taught him.  Just as I learned many things from the Beatles about song formation.  George definitely picked up the style that I taught to John.  and a finger style that they had not known before lead to some new songs.

Donovan:  Yeah, in India.  George wrote a verse, "When truth gets buried deep beneath a thousand years of sleep, time demands a turn around and once again the truth is found."

It was a beautiful verse and George was upset later because I didn't use it.  I said that singles used to be three minutes long and by the time that long solo was played, I wanted to add George's verse but Mickie (producer) said, "That's it."  So we just served the song rather than add the verse.  But it was a wonderful verse and it was right in keeping.  So George wrote that verse.

Q:  There is a recording going around to Paul playing "Blackbird" with you in the background.  Could you explain what that is all about?

Donovan:  It was around his house at St. John's Wood or Applewood in one of the back rooms.  It was bootlegged.  I was hanging around Paul at the time and we were just singing and picking stuff like that.  Yeah, that's where that came from.  It was just an evening, one night, and we were just playing.


Q: Did you attend any Beatles recording sessions?

Donovan:  Yes -- Sgt. Pepper.  I visited because those sessions were actually huge parties with incredible amounts of people.  Of course the great orchestra session -- I forget the name of the track -- but a couple of the other tracks, I visited as well.

Q:  What was the environment like at these sessions?

Donovan:  Well, it was like a Stones session, except not quite so much of a party.  It was like a concert really.  Everybody was there, there were five or six cameras, all the orchestra and suits and tails.  It was a huge party and an amazing session. 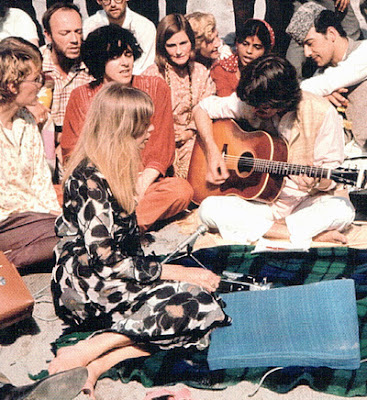 Donovan:  It was great to be there, because we were all touring at the time, but we had these few weeks together.  The press were outside, but inside the compound it was great.   I got a chance to learn and play and hang out with musicians that I was very impressed by.

We all were able to lay back and relax.  Paul Horn, the great flute player, was there.  We played music and George experimented with Indian instruments that were brought it.  We sat around and played and picked and learned  meditation.

But for me it was a chance to meet the Beatles on a level far away from pop music and what we were all involved in.  It was quite a unique experience to be able to shut ourselves off from everything that was going on.  It was fun.

Q:  Isn't there a funny story about John and the Maharishi?

Yeah, that is a funny story.  you see, Maharishi was quite a relaxed guy, but there was an embarrassed silence in the room.  It was the four Beatles, Mia Farrow and myself, or was it Mike Love?  We'd all just arrived, and nobody was saying anything.  We were all wondering what to say.

John was so funny and so direct, that to break the silence, he went up to the Maharishi, who was sitting cross-legged on the floor, patted him on the head and said, "There's a good little guru."

We all laughed.  It was funny.  John was very funny, and he always said exactly what he felt.