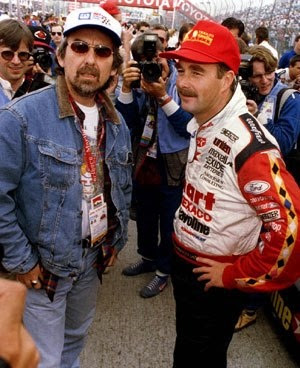 This story is from the Autumn 1994 edition of Good Day Sunshine magazine #74.  It was written by Ann Stanton.  I discovered this race took place on April 10, 1994.


I had been feeling kind of depressed lately.  I needed lift, and boy, did I get one.   The story takes place at the Phoenix International Raceway Slick 50 200.  The driver's name is Emerson Fittipaldi.  My story begins like this:

It was around 1:45 on a Sunday afternoon and I had just gotten home from Mass.  My girlfriend Pat called and asked if I had read today's newspaper, as there was an article that said George Harrison was in town for this race (which I knew absolutely nothing about).  He had had dinner with Emerson Fittipaldi on Thursday night, and had been at the races with him on Saturday, and in the car with him and all.

I jammed over and picked Pat and her daughter Allison up within 20 minutes, and we were off.  I did my own racing to get there (being about an hour's drive away).  We got down there around 3:15 and they weren't giving any discounts on tickets, even though it was going to end in less than an hour.  We weren't going to buy one, but then figured we had driven all the way down there, so let's take a chance.  We bought the cheapest tickets ($12) and went in.

We figured we weren't going to be sitting hillside, and luckily, being so late, no one checked our tickets, so we headed over to the VIP section.  We went as far as we could go, and sat on the end of the aisle, trying to see if we could spot George, since there were only about 53,000 people there.

I really don't know too much about racing (nothing actually), but what I saw of it was exciting.  It went on for about another half-hour and the winner was Fittipaldi, George's friend that he dined with on Thursday.

The people started leaving, but we went the opposite way, because if George was there, he'd be with his friend, right?   Quite a few people hung around the section where Fittlipaldi was being congratulated, and we were trying to look for George through the fence.

I was there, "Where is he?" and all of a sudden I spotted Olivia, so George couldn't be too far away.  Then I saw this guy walking, and I knew his walk -- don't ask me how.  It was HIM!  YES!  I yelled over to Pat to see if she spotted him, and this guy around me wondered who were were talking about.  We told him we came to find George Harrison and we knew nothing about car racing, which is something I probably shouldn't have said, being around race fans.  But he got a kick out of it.

I kept my eyes on George and tried to take some pictures, because I didn't think we'd see him after the award ceremony.  When it ended, the crowd started leaving, and George had put on a baseball cap.  I tried to follow his cap with my eyes, but with that crowd it wasn't easy to do.  I lost him.

And then the best bit of luck happened.  They opened up the gate and started letting people go down by the celebrities.  I thought for sure we would need a pass this time, but we were lucky again -- they weren't checking for passes.  So we followed the crowd, and I was determined to find George.  We just started walking fast, hitting every spot and direction possible.  I headed over to the left and saw a tent set up.  Again I saw Olivia first, and right at a little table was our own Georgie boy!  AAAAHHH! 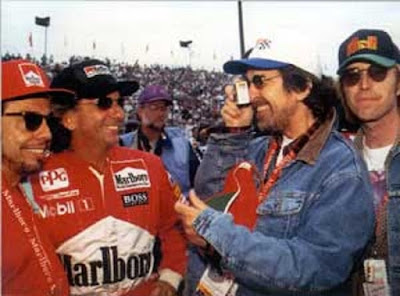 They had the area roped off, so we couldn't get in there without a pass for sure.  We didn't even try.  I started to take some pictures, and I just kind of watched him and tried to hear him talk  Once in a while you could hear his great little Liverpudlian voice.

I continued to watch him and Olivia eat, and he had a few beers.  I waited a while to let him get a little loosened up.  We didn't want to bother hm too much, because most of the people there were more into racers, and I felt we were the only ones interested in George.  After a while I got up the nerve to take out my little Cloud 9 CD booklet that I brought along with me just in case.   I took it out and the next time he looked over our way he smiled.  I kind of just looked and twisted the book in my hand with my pen and mouthed, "Could you please sign my booklet?"  He find of laughed; I guess he was thinking about it.  In the meantime, people were taking his picture and talking to him.  He did give a few autographs to some of the people in there with passes, and I never thought he'd really do mine.  But I continued to wait until he finished his sandwich.

he was really starting to act silly -- he grabbed the flower pot off the table and held it over Olivia's head for some pictures.  He was really doing a lot of laughing.  More time went by, which was fine with me.  I was happy to just stand there and watch him.

He looked over again, and I held up my booklet.  This time he told his friend at the table.  He pointed at me and told him to get my booklet so he could sign it. I gave him my black Sharpie pen too, and hew as signing while I was mouthing, "Oh, my God!"  While he was signing, I noticed several couples at the table next to George.  They already had a picture with him and an autograph, because they were lucky enough to be in there.  One woman was goofing on me, saying "Look at that girl," because my face and mouth said just how  I was feeling, and I don't think George autographs too often.  I yelled over to her, "You don't understand, lady," and she kind of felt bad.  She said, "Oh no, I'm happy for you."

I continued to gaze back at George and took a few more pictures of him signing.  Then the film ran out -- darn it.  I yelled over to him, "Can you please sign it 'To Ann?'"   The guy brought it back over to me, and George smiled.  I yelled over, "Thanks so much, George!"   He did sign "To Ann."

I would have said he could keep the pen, but I watched him play with it for a while -- rolling it on his leg.  When he put it down, I  yelled over to the guy again for my pen, and he said, "Aaah, aren't you even going to let him keep it?"   I said, "Normally I would, but he touched it!"  He picked it up from the table and brought it over, and I thanked him and George again.

I wouldn't leave until George left.  He eventually stood up and was talking t some other guy.  I was wishing I had some film left.  He looked good.  He was wearing black dungarees, a while shirt, a white vest and two caps, one on top of the other.  A little while after that he did leave, and I was on Cloud 9 for the rest of the night.  Great!