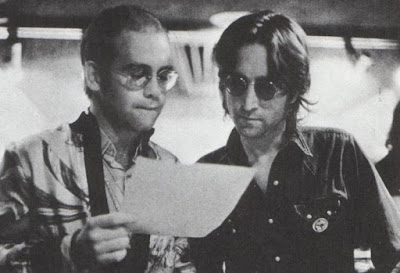 Scott Muni:   Elton, what prompted you to record, "Lucy?"

Elton John:   I said to John, "I'd love to record one of your songs.  Which one would you like me to do?"  And he said, "No one's ever done 'Lucy in the Sky with Dimonds'; no one's ever recorded that ever,"  I mean, the Beatles always had cover versions on all their songs but nobody ever did "Lucy in the Sky with Diamonds."  so we did that one, along with "One Day at a Time,"  which is on the B Side, also one of John's. 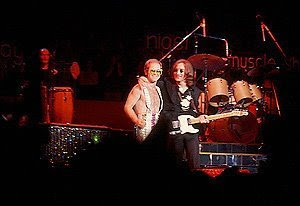 SM:  The last appearance John Lennon officially made onstage was with you on Thanksgiving night, 1974, at Madison Square Garden.  I've seen a lot of rock n roll in my life, but I'm hard pressed to remember anything quite like that.

EJ:  It was an occasion where grown men, even Scottish road managers who'd seen it all, cried.  I've never seen anybody get an ovation like that.  No one will ever beat that for me, ever.

I mean, when he walked on stage, it shook him.   and I think it shook the world when he died, just how much reverence people paid towards John Lennon.  Because John Lennon really represented the rebellious side of the Beatles.  He was the one who slept in the bag with Yoko, or whatever.

And I think it shook a lot of people that when he died that much reverence was shown towards him.  And I'm so glad it was.  hopefully, he'll have been dancing when he saw it.  He deserved it.

He was physically sick when he came onstage with us that night.  You see, I'd made "Whatever Gets you Through the Night," and I sang on another track on Walls and Bridges, and we made sort of, well, not a hard bargain that if it got to number one, he'd come onstage.  And he kept his bargain.

He came up to Boston to see us, just to check the show out .  When he saw all the equipment he said, "My God, is this what it's all about?"  I came by wearing a chocolate-box cover and nothing else.  It was his time with May Pang and he was very happy.

Just to give you an example, he would take my band to the airport and make sure my mother was OK.  I've never met anybody more thoughtful.  I know you read in some books that John would be cruel and had a very cynical sense of humor, and I've seen that side of him too.  I was with him at a particularly crazy time for him and for me.   But underneath it all, I never saw anything else but kindness.  He is sacred to me.

He is the only person in this business who is absolutely, one hundred percent sacred to me.  And even if I'm doing bad things to myself, or if I'm being totally miserable or morose, or being unreasonable to people, I sometimes think, "Oh my God, John, if there is really a big pearly gate, you're going to be standing outside of it and giving me the biggest lecture."

That's  because he's the only person in this business that I've ever looked up to, the only person.  I've met my equals. I've met people who are great like Mike Jagger and Pete Townshend, who I admire tremendously, but they are not in the same league, I'm sorry.

SM:  You were very close to John Lennon.  And when the tragedy happened, you and Bernie, with words and music, came out with a brilliant tribute called "Empty Garden."

EJ:  Yeah.  When John died, I couldn't believe it.  I was close to John for a year; let's put it on record.  And I hung out with him and I loved him.   I've never met anybody who impressed me so much as that man.

When he died, we were in Australia and we heard it on the plane.  I'm not a religious person particularly, but we did go to the cathedral to have ten minutes of silence to coincide with Yoko's request.  And it was the least I could do for him.

So later, I wrote an instrumental called "The Man who Never Died."  It's never been released; it's still in the can.  That song made me upset when I wrote it.  That was my tribute to John.

And then Bernie came up with the lyric to "Empty Garden," which I thought said it all.  It was very hard to say in a lyric and a lot easier in an instrumental.

SM:  Well, I can tell you that I did see him recently, and he's a very handsome young man.  Talented too.  He's very active and he's into everything.  He's all questions.

EJ:  Oh, I'm sure he has the brain of someone of 21 probably at this age.  There are certain reasons why I'm not as close to him as I should be.  I just feel that Sean has been a little exploited at some times.  But that's not for me to say.  I'm not part of the family.  I was just lucky enough to know John Lennon for a year and, God, that was one of the happiest years of my life.  And "Empty Garden" is the least I could do.
Posted by Sara S. at 8:58 PM