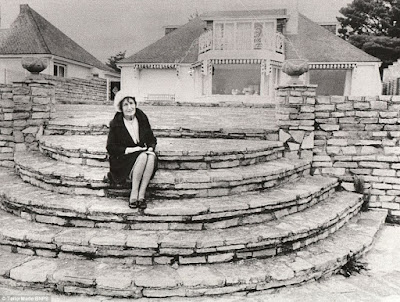 This is a lovely story of a fan that spent the day with Aunt Mimi in 1967    Aunt Mimi was really sweet to the fans that wrote to her or visited her.   She doesn't ever get the credit for her kindness towards John's fans.    I am glad to have found a story like this that shows that she was so much like Mrs. Harrison in her kindness.

Can you imagine listening to Sgt. Pepper with Aunt Mimi?    I am not sure what the writing was talking about with the stereo.

I had been writing to Aunt Mimi for a few months, and I had phoned her the night before we met.  She was fabulous, and you could see so much of her in John.   She met us at her front door with smiles and a cheery voice.  I was frightened at first, but Lynne and I followed her into her large living room and made ourselves comfortable.   The first thing I noticed was the beautiful view from her large bay window of the water outside, the boats and the islands across from her. 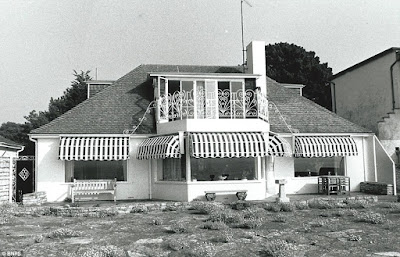 When we finally did get situated, we told Aunt Mimi about meeting Paul and Ringo, about visiting Liverpool – Menlove Avenue, Forthlin road, NEMS, The Beatles Fan club,  Penny Lane, the Art College, and of course the Cavern  this is where she started her story of John, of catching him at the Cavern during his lunch hour from school and pulling him out.  She went on to tell us of many things, and she also showed us a few photos and cards made by John in his school days. 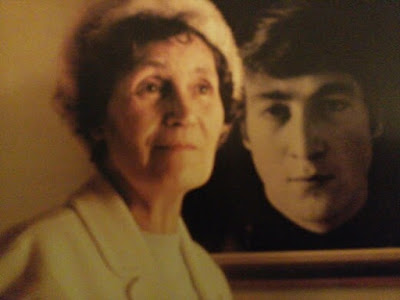 From the living room we went into the lounge (I supposed you’d call it that) where she has this enormous photo of John on the wall which Astrid, Stu’s girlfriend, had done of him when he was 18 years old.  It was absolutely beautiful.  Then we went back into the living room and talked some more – about life in general, The Beatles, their records, fans, and about us.  We drank tea, joked, took photos, and had a very good time.

We had intended to stay just a little while, but time seemed to slip by so very quickly.  I, myself, was enjoying every minute and, through Aunt Mimi, I found myself knowing John so much better – not as a Beatle but as John Lennon, a young man from Liverpool.  And I felt myself so close to him, someone I hadn’t even met but already knew.

Aunt Mimi asked us to stay longer, and called the train station for us to find out when the trains left for London.  After that she insisted on finding us something to eat, something which she never does or had done for visiting fans.  I felt out of place with her going out of her way for us, but we helped in the kitchen, chatting on like old friends.  She fixed us John’s favorite of scrambled eggs with cheese on buttered toast.   Drinking more tea, eating and chatting, we sat in the dining room in a world of wonderment with a woman who was just Aunt Mimi when we arrived, but now had become a very deep friend to us.

After dinner, we went back into the living room and saw Tim, one of John’s old cats—quite beautiful he was, with long rusty-white fur.  We decided then to go out back and take photos and look at the waterfront.  From there we went back into the lounge where Aunt Mimi put on Sgt. Pepper for us on this enormous stereo John had sent it for her; it was the one on which he, Paul, George and Ringo had recorded their very first record, Love me do.  Lynne sat at one speaker and I at the other, listening and singing along with the music.  Mimi sat watching, occasionally going into he living room or fixing Tim something to eat.

Time seemed to be slipping by so quickly, but we had to leave.  Aunt Mimi did tell us that John’s cousin David was down from Scotland and she wanted us to meet him.  He was out at the shore spending the day.  We did have to leave, and I felt like crying because she was so wonderful and so much a friend.  She walked us out to catch the bus, and Lynne took moving pictures of her.  As the bus came, she held on to both my hands and told me to please return next year and visit her.   I f she only knew how much I wanted to…if she only knew how much she meant to me now, as a friend….a woman of dignity, sincerity and Love.
Posted by Sara S. at 9:18 PM