First of all, my deep sympathies goes out to the fans of David Cassidy.     While I am not in the generation that was a fan of his and only know about him through TV shows about "teen idols" and things like that.     But I keep reading that in the mid-1970's David had a bigger fan club than the Beatles ever had, so I know that there are a lot of you that feel today that you have lost a little bit of your young teenage years and are mourning his loss.


David Cassidy was a Beatles fan.   And he got an opportunity to meet John Lennon and hang out with him during John's "Lost Weekend" era in Los Angles.


Yeah, and he (John Lennon) came to my house on New Year's eve and we got drunk and played Beatles songs and I got to sing Paul's parts. When you play in casinos, they don't like you to tell stories so much, most times they say [brusquely] "Just play your songs." So instead I just say "I was lucky enough to play Beatles songs with John Lennon till five in the morning and here was one we played." Keep it short. John and I  became good friends when he was recording Rock and Roll so I was able to come down to the studio a couple of times and if you could imagine Phil Spector walking around with a fucking gun...It was nuts.

Here is another telling of the story:
“John and Yoko had a friend who was a very close friend of mine, and he brought John over to my house. He just walked in, and it was New Year’s Eve, and I remember I was in the kitchen and Susan Dey [who played Cassidy’s sister Laurie Partridge on the TV show] tapped me on the shoulder and said, ‘David, there’s a Beatle in the house!’ Later, we would go into my music room, we start playing, and I of course instantly go back to the early Beatles songs that I first learned, and since then he had written another 500 songs and hadn’t played with the Beatles in however long, so I retaught him a couple of the early Beatles songs! Please Please Me, some others. John was musically my hero, but what I also loved about him was he had a remarkable sense of humor, a great passion for life. He’s probably the most unique person I’ve ever met. To get to meet him, to get to know him, to get to play with him. And I remember one of the most amazing compliments I ever heard, they were asking John about the early days of The Beatles, and he said, ‘Oh don’t ask me, I don’t remember, ask David Cassidy, he was bigger than we were.’  I read that and I went, ‘Oh my God, how did that happen?’ It was such a great experience for me to get to know him.” 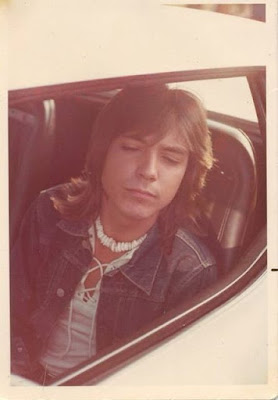 An interesting side note is that May Pang claims that John was jealous of Cassidy and accused May of having an affair with the teen star.    Apparently the three had lunch together one day and John thought the two of them were doing a lot of flirting and on top of that -- they both ordered the exact same thing.    John got really mad and swore that May was cheating on him.   What other explainatin could their be to both ordering the same food at a resturnant?


David Cassidy has a small part in Wings history as well.    The 1976 Wings over America tour was supposed to have started in April of 1976, but it had to be postponded because lead guitarist, Jimmy  McCulloch broke his finger while wrestling backstage with (you guessed it) David Cassidy during a break from rehearsals in Texas.    Your lead guitarist cannot play guitar with a broken finger, and so everyone had to wait a month for Jimmy's finger to heal before the tour could begin.