Denny Laine and the Cryers - A concert review 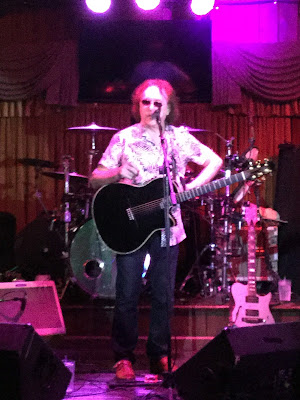 On October 21, 2017 my mom and I saw Denny Laine and the Cryers at the Trainwreck in St. Louis as part of the St. Louis Classic Rock Society Celebration.     We had seen Denny Laine in a full concert a few years ago and had seen him with other members of Wings at the Fest in August.   It is always hard for me to resist going to a concert (especially when it is an affordable $10) with a Beatles connection when it is happening in my area and so we went to see the 3rd member of Wings again.


There was a time when I didn't really like Wings.   However, once the Wingspan documentary came out, I decided to give them another chance and I started to really appreciate Wings as a band separate from the Beatles.    I think the harmony parts that Linda and Denny did really make the band.

Of course Paul and Linda weren't with Denny Laine in this concert and it wasn't a Wings show.   Denny started off singing some songs that he did with the Moody Blues.    Besides the song "Go Now."  Speaking of this well-known song, when Denny did it at the Fest, his voice couldn't hit the notes.    This time his voice sounded stronger and he had a member of his back-up band (the Cryers) singing some of the higher notes.    I don't mind the older performers using the assistance of another younger person in hitting the notes. 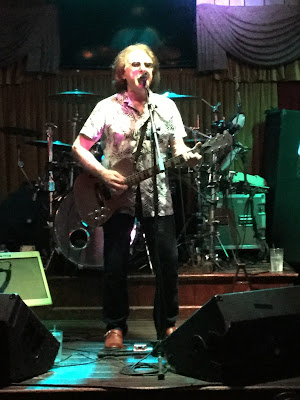 Denny went right into the Wings portion of the show and sang all of the songs you think of when it comes to Denny Laine and Wings (Time to Hide,  Spirits of Ancient Egypt,  No Words, Again and Again and Again) with a lot of energy and got everyone dancing or signing a long.      Those songs I expected to hear him sing --  I didn't expect to hear Picasso's Last Words and it just might have been my favorite song of the night.      I also really enjoyed when he sang the song Paul left off the Red Rose Speedway album,  "I would only smile."     Of course songs like "Mull of Kintyre," "Live and Let Die" and "Band on the Run" are always fun and get the audience singing along, but I much prefer when Paul sings them.

I have to mention that Denny's backing band, the Cryers, are outstanding.   You have to watch the girl on the keyboards.    I think she was channeling Linda some of the time and her harmony was spot on. 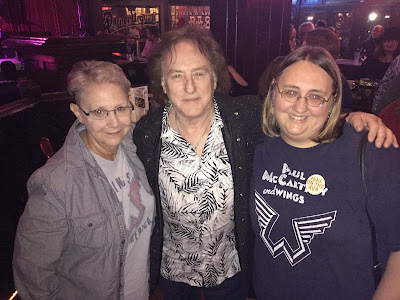 Denny was happy to sign things that fans brought with them and he had a few Wings promo photos for sale that he would sign.  He also posed for photos and chatted a bit.    He was charging money for this at the Fest.   It was all free of charge at his concert.

If Denny Laine is a guest at the Fest for Beatle fans again, I think I will skip it and go see him in concert again instead -  it was an overall better experience.