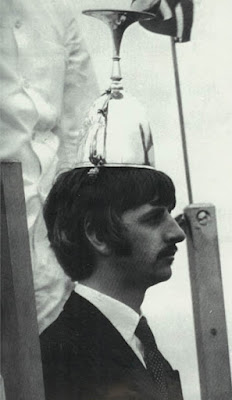 I told Ringo it was time to announce the winners of the Fall MTBFR contest, and he just insisted on putting the trophy on of his head.   Silly Ringo --- that isn't a hat!

44 Beatle fans entered this contest.  And if you recall, you had to send me the name of you favorite Beatles song in the Magical Mystery Tour film (not the LP or EP but the movie itself).  Here are the results (just for fun!)


For a while there, Your Mother should know looked like it was going to be the winner, but on the last few days, five Walrus fans showed up and it was the winner!


As for the winners of the contest:

The winner of the London prize pack is #32 -  Kim Kirk

The winner of the Liverpool prize pack is #14 -  Jeff Pope


Congratulations to the three winners!  You have three (3) days to contact me with your mailing address.  If I do not hear from you by this Thursday, I will pick another person to win the prize.

Another contest will be held in late January,  and you can always try again to win.    I hope you have fun with these little contests that I hold four times a year.    As you all know, I try my best to align this site with the Beatles fanzines of the past, and they frequently held contests and did fun things like that.   Just trying to put the FUN back into being a Beatles fan!
Posted by Sara S. at 6:06 PM