Her Claim to Fame was meeting the Beatles

This story is from The Sun newspaper in Lowell, Massachusetts and was published on February 9, 1984.  In a way I doubt the truthfullness of the story, but it could be true.  Who knows? 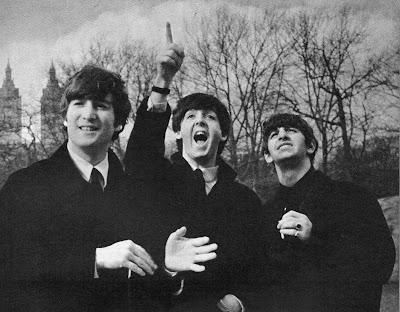 Julie Cote was 19 1/2 when Paul McCartney came up to her and a girlfriend in the lobby of the Plaza Hotel in New York City and said in a a broad Scottish accent, "You must be the girls from Scotland."

How did it happen?

"It was the silliest thing,"  she said.

"I met the Beatles the day before the Ed Sullivan Show, by appointment through their manager," said Cote.  She was a maid in a New York City hotel, just four months over from Scotland, and an avid Beatles fan before most U.S. teens had even heard of  the group.

"We didn't know people here, but we knew of the Beatles prior to arriving in the States.   We couldn't find their albums anywhere.  All of a sudden the Carnegie Hall concert was announced and kaboom, it was like an explosion.

Tickets to the Carnegie Hall concert, the Beatles first U.S. performance, (Sara's note:  not true--what about D.C.?)  were sold out, so she wrote to a London disc jockey, asking if he could get tickets for her and her Scottish girlfriend.

"The disc jockey, by name of David Jacobs of the BBC passed the letter to Paul McCartney.  Their road manager, Mr. Sullivan (Sara's note:  who???)   called me on the job and invited us to have  dinner with them."

The Beatles arrived in the States on Friday February 7, 1964, and Julia and her friend arrived at the Plaza hotel just in time for dinner.  But the security men wouldn't allow them to use the elevator.

The next morning, while she was on the job, she got a call from their manager, 'He said, 'If you can  be down here at the Plaza within the next hour, you can meet them.'  We went through three security checks."

"I don't remember what floor they were on, but we got to meet three of them.   George was sick."

"Ringo was an extremely funny individual," she said, "He couldn't find his boots and he couldn't find his coat.  He spent the whole time going from room to room in their suite saying, 'Have you seen my coat?'  I think someone must have hid it."  Cote says.

John Lennon was very down to earth, and wore very, very thick glasses.  He asked us, 'How come you girls weren't here for dinner last night? We waited until 10 o'clock!" she recalls.

"We talked about our families.  We asked them how their families felt about them touring and becoming such a phenomenon.    They said their families enjoy it.  McCartney's brother was already in a band."

"McCartney was a real conversationalist. " She says.  "He was asking us what we thought of the States.  To him it was a hotel room.   They arrived on Friday afternoon and this was Saturday."

She was dressed, as she recalls "typical for 1964," "Bouffant hairdo, one of those little Jackie Kennedy hats and a two piece suit.  It was crazy."

Cote and her friend were with the Beatles for about an hour before they had to leave to go to Central Park for publicity photos.

Cote lost interest in the Beatles when their music went psychedelic in 1968 and 1969, but then she came back to them, "Their music will go on forever," she said.

"the girl I met them with has since gone back to Scotland. Neither one of us has kept in touch."

"I suppose it is my only claim to fame." says Cote who still listens to the Beatles and has all of her original albums and 45's.