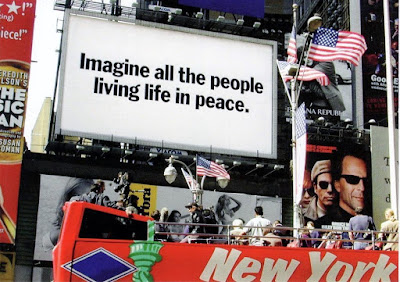 Everyone remembers September 11, 2001 --- but do you remember September 12?    That was when everyone around the world were united.      We all experienced this terrible act of hate together and people were there or one another.     I just remember lot of love and kindness towards each other and a promise to never allow us to be filled with hate towards our fellow man again.       And I look at us in 2017 and I realize that many who made that September 12th promise have forgotten.    It is sad.


This billboard appeared in New York City shortly after 9-11.   I am not totally sure if Yoko Ono was behind it, although I think she was.     I have never been one to speculate what John Lennon would have done in certain situations, except for after the terrorist attacks.   I know that he would approve of this message and would have done something to help the people in his city.