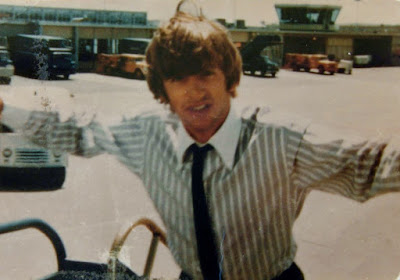 Dave:  I wanted to ask you one question.  A personal question, about Maureen.

Dave:  She is performing duties as your private secretary, is she?

Ringo:  It's a lot of rubbish, really.   you see, we had an interview together.  'Cause she's given that job up, you see, the reporter said "Well, what are you going to do?" and I said, "Well, if she wants to end up working for me..." and then there was this headline, you see --' Ringo's new secretary.'  She hasn't done anything yet.  I haven't seen her for a long -- quite while actually, you know.

Dave:  Oh, is that correct?

Ringo:  Yeah.  We're not going sort of steady or anything, you know.  It just happened that I met her, and Ithought 'Well, would you like t come away?"-- you know, cuase it's no fun on your own.  We can't just sort of go out, and -- you know -- with girls.  Not really.  And we can't just sort of go to dances or clubs, or that, you know.  and when we went away, we were chaperoned, anyway, cause the captain of that boat and his wife were on board so we, you know...all the magazines in America say, sort of, you know unchaperoned.  Ho ho ho!  We were chaperoned, you know.  there's nothing, so there.

Dave:  Are you looking forward to seeing any particular part of Los Angeles, or Hollywood wile you're here?  I mean other than the fact that it's been rumored that you're planning on -- wish to see Disneyland?  Have you thought about it?

Ringo:  No, we didn't plan -- I don't think even wished it, you know.  I mean I never thougth about Disneyland.  We may go there, but I never thought or said, "Let's go to Disneyland."  I didn't even know it was here, actually.   And no, I just -- we go to the places and then you never know what happens, you know.  We may go to a club or something like that.  But we're nothing planned.

Dave:  How would you find the audience in Canada cmpared to the American audiences?

Ringo:  The same.  They're the same most of the world over.  They're only Paris that are different, when you get more fellows than girls, you know.

Dave:  What -- do they have the same acceptance though, even though the crowd is different?

Ringo:  Yeah.  But instead of a scream, you get a roar, you know.  Instead of "aaaaah" you get "rooooh".

Dave:  Derek is yelling.  Thank you very much, Ringo.

Ringo:  Take no notice of him, Dave.