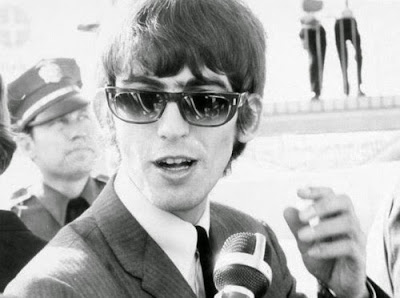 
Dave:  Say George, I wonder if I could speak with you for just a moment?  I'm Dave Hull from KRLA.

Dave:  I've had several conversations with your mother.

George:  Yeah.  I believe you have, yes.

Dave:  Has you mother asked you any questions about the amount to letters she's been receiving?   She's been most kind as you know in answering them.

Dave:  Do you get a chance to see your mother and father?

George:  Yeah, occasionally.  Oh yes, and if I can't go up there, they come down to see me whever I am.

Dave:  They do get a chance to see you then?

George:  My parents have been very good in answering letters.

George: I know she said -- my mother said that she's had al ot of letters.  In fact, more letters from California, around this area than any other place.

Dave:  I'm responsible for that, and I hope she's not upset in any way.

Dave:  A lot of kids asked me about Pattie Boyd.  Goerge, are you engaged?

George:  No, no, not engaged, not married and no plans for marriage.

Dave:  Thank you very much, George.


Dave:  George, there's a couple of questions I'd like to ask you.  Are the Beatles planning on visiting Disneyland?

George:  Disneyland?  No, don't think so.  You see, if we did suddenly think, "Let's go and see Disneyland," we make quick arrangements, and go there without letting anybody know.  Because if we said, "Yeah, we'll be going there on Monday,"  then there'd be thousans of poeple there, and we wouldnt' get to see it anyway.  But as far as we know, you know, we haven't made any plans to see it.

Dave:  I see.  Okay.  Are you planning on cutting a new record at Capitol Records in town on Monday?

Dave:  What part in the movie did you like the best, "A Hard Day's Night."?

George:  Um, I liked the bit in the field.

George:  I don't know about making it.  Making the film, I don't know.  I think I enjoyed the scene in the bathroom.

Dave:  With John in the tub?

George:  Yeah, that's making it.  But just as of in the film, I prefer the bit in the field.

Dave:  I see.  I do want you to please convey my best wishes to your mother.