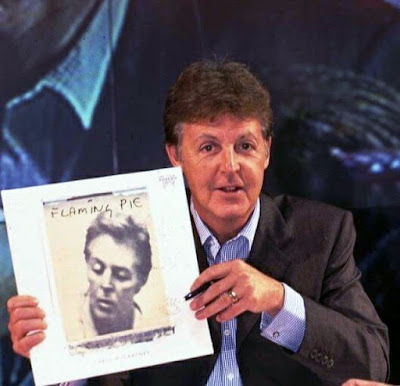 It has been 20 years since Paul McCartney released his album, Flaming Pie.    This has always been one of my favorite McCartney solo albums.    However I was not sure if it would still be a great album 20 years later.   Would it seem dated and little too 1990's for today?     I figured it was time to give this album another listen.


The first thing I did was re-read over the liner notes, which were written by Mark Lewishon.   I discovered that Ringo played on two songs, Linda sang back up on two songs,  son James played guitar on one, George Martin arranged a song and Jeff Lynne did some producing.    Hmmmm....that alone sounds like an outstanding album.


I was pleseantly pleased to hear Paul's clear and classic voice coming through my headphones.    The melodies of songs such as Calico Skies, Little Willow, and Heaven on a Sunday were enough to bring about emotions.      And that is overall the feel of this album --   one full of deep emotions.     Knowing what was going on in Paul's life between 1995-1997 (when the album would have been released), it makes sense.    Paul was dealing with the diagnoses of his wife, Linda having breast cancer, the very thing that took Paul's mother from him.     It had to have been very difficult for him and I think some of that emotion comes out on Flaming Pie.

Paul also had just came off the tails of the Beatles Anthology and admits that he had the Beatles in his mind when he made this album.    It has a Beatles feel about it, and not just in the title song.


The album at times seems 'unplugged' but in no way does it have a strong 1990's feel about it.   There aren't any grunge songs or anything that stands out that it is from the mid 1990's.

The one song I didn't care for was his duet with Steve Miller called "I used to be bad."   This song obviously started out as two musicians jamming and maybe it should have stayed that way.    Not that it is a bad song, but it seems to go on a little long and just feels out of place on this album.

The song that surprised me was "Somedays."    I was surprised by how lovely the orchestration on this song was (it was done by George Martin which I dont' remember).    Everything about this song was just really nice and it was never one that stood out for me in the past.

My favorite song is still "Beautiful Night."    It is actually my all time favorite Paul solo song.  I know that some of the lyrics are goofy, but to me it is just the perfect Paul McCartney song.    Ringo drums on it and Linda sings background.      I picture Paul singing this song to Linda and it just seems (for a lack of a better word )  beautiful.


Is Flaming Pie a Paul album that you enjoy?    Have you given it a good listen in the past 20 years?   If you have never given it a chance, I really recommend it.   I don't think you will disappointed.