A Fan Talks About Screaming 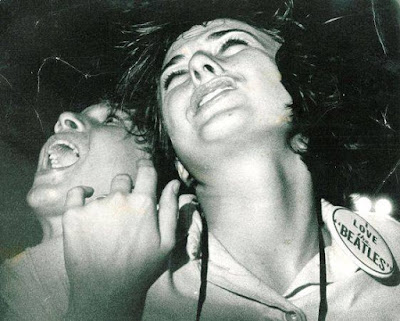 Something my friend said recently, made me think seriously of the tremendous effect that your boys have on us teenagers.   We were talking about your next tour -- which I hope will be very soon, and she said, "I'll gok with you, IF you promise not to start screaming."   But I just coulnd't promise.  When you see the Beatles, you can't just say "Oh well, I think I'll scream now!"   Screaming isn't something you can turn off or on, like a TV set.   Nor is it something you do because it's "the thing" or because your best friend does it.  It's something quite natural.   All of  a sudden, something gets you -- you realise -- this is really THEM -- for four tatty ends (sorry!) who have grinned at us from so many  manazines, LP covers, etc.

I'll never forget the day I went into Liverpool with another friend, Imelda, to welcome  you when you came home for the premiere of "A Hard Day's Night."    As we were both thirteen at the time, we considered ourselves quite grown up, and our conversation on the way into Liverpool was interspered with remarks like, "I won't scream, will you?"  "Of course not only the young kids scream" and so on. 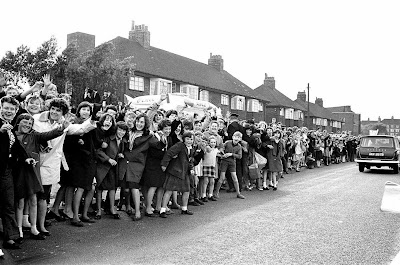 So  there we were standing in Bold Street, waiting anxiously for signs of your appearance.  A barrage of screams, from further up the street told us how near you were.  Imelda and I braced ourselves, once more knowing that nothing would induce us to lose our dignity by screaming.

Then, the big black car drew nearer, and, I know this sounds corny, soppy, meldodramatic, etc, but it's the truth, suddenly nothing mattered but the fact that YOU were only a few feet away from us.  I let go with all I had and just screamed my head off.  I suupose Imelda must have done the same, but I couldn't tell at that moment.  I could see Ringo and George, smiling and waving, and, like all the other girls around me, I suppose, I was certain that they were smiling at, and waving to me alone.  I felt a triffle sad, because John, my favorite (he was then, and he still is now) was on the other side of the car, and I couldn't see him, but in a flash, it was all over, and the car had moved on.

Imelda and I just staggered away.  All our promises to retain our dignity, and just wave and smile, had disappeared as if in a puff of smoke.

I know that if ever I see you, in person, again, the same thing will happen, so I don't make promises any more.

I don't quite know why I'm telling you all this, Beatles.  I just thought you may like to know a little of the effect you have on a frantic fan, namely me!
Posted by Sara S. at 9:40 PM