This is basically an interview with Denny Laine.  I do not understand why Denny Seiwell is called "Danny" in this story.   But overall, I don't think this is too bad. 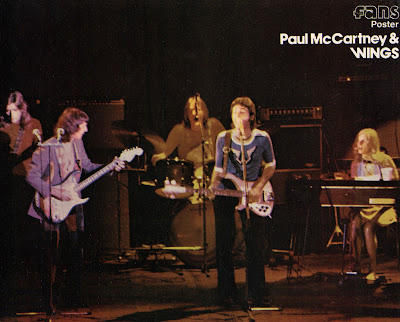 A single mattress lies on the floor of Denny Laine’s one-roomed flat.  That was where he was sleeping when the phone rang.   He answered it.  A voice said, “Hello, Denny?  This is Paul.  I’m thinking of forming a band to go out on the road.  Are you interested?”

The voice was Paul McCartney’s.   And to people outside music it might be surprising that he and Denny had not spoken to each other for over five years.  And yet it was Denny Laine whom Paul asked to join him.   Straight off.  No question of an audition or anything like that.
“I don’t find it surprising,” says Denny.  “You see, we’re friends.  We know each other: we know how the other feels and what the other does.”

There is so much that’ s surprising.  For in those five years Paul and Denny last spoke to each other, their lives had followed very different turns.

Paul’s had been much publicized.  His fortune earned with the Beatles.  His marriage to Linda.  His homes in London and Scotland.  His final break with John, George and Ringo.

Denny on the other hand, had been quietly in pursuit of himself.

When he and Paul first became friends, Denny was the singer with the Moody Blues:  he split and they went on to earn a fortune with Justin Hayward in his place.  He ran his String Band:  made solo records; spent two years planning the short-lived group Balls—and in between all this vanished to Spain.

There he spent a year living with gypsies in Andalucía learning flamenco guitar.

“I’ve always liked the basic music of the country,” he says, “I like their folk songs.  To me, pub songs are folk songs and flamenco is the folk music of Spain.   It was so cheap living out there.  I lived in 12 shillings a day, which included my rest for a little artist’s shed next to the pig sty.  That was my pension, which I shared with an American, Charles Jackson.

“He came from a wealthy family, and said he was descended from General Jackson, but was running away from the Draft. He wanted to learn flamenco, too.   I always go where the musicians are.  That’s me.  I've always like to feel part of a community of musicians.  Those gypsies in Andalucía are real musicians, but it’s as hard for them to escape from there as it was for me to get away from Birmingham!”

Denny returned to London two years ago and teamed up with former Move bass guitarist Trevor Burton and drummer Alan White (who works with John Lennon on his Plastic Ono Band records).  The three of them lived in a Hampshire cottage as their ideas gelled for their group.

Sometimes they work on sessions for friends:  Denny and Trevor toured with Eric Clapton and Ginger Baker in Airforce.  In between times, they would work on solo ideas. By early this last summer, Denny felt that he had enough of his own songs for an album of his own, and he’d been working all night on that the day Paul McCartney phoned him at his flat.

“Paul told me I’d get a call in a few days’ time, and then I’d meet him up in Scotland at his farm.”  Denny told me.

As we talked, I glanced around his home:  this small home, with its kitchen and bathroom off.  On the walls were Victorian paintings, some religious in theme.  A glass display cabinet was packed with books on art, poetry and music.  On the floor lay a palette of paints and beside it spread out on pages from “The Times” an old marble clock, in piece, which Denny had been repairing and cleaning when I arrived.  As we talked, a Bob Dylan album played in stereo in the background.

“I got the call,” said Denny, “and went up to Scotland via Birmingham, where I called in to spend a day or so with my family.

“Danny (that’s Danny Siewell, the American drummer in Paul’s band) met me at Glasgow airport, and then we caught a plane to Campbelltown, which is the nearest airport to Paul’s home.  We don’t go that route now; Paul always uses a private plane from a hire company and we can fly direct from London to Campbelltown in little more than half an hour.

“That night Danny drove me up to Paul’s farm and we sat around there, talking and drinking, discussing ideas for the band, and then recalling the old days.  Back in those days, musicians like the Beatles and the Moody Blues used to go down to the clubs in the evening not to rave it up, but to relax.  After working we’d go down to the clubs like the Ad Lib just to relax; that was all it was to us.  And of course in those days we all used to know each other, all working in the same business, so there was a lot to talk about.

“I’d been traveling that day for 16 or 17 hours, so I just fell asleep and Paul and Danny carried me off to bed, tucked me up, and gave me a goodnight kiss.  I’d been shattered by the journey.”

Over the next day and weeks, the four of them -  Denny and Danny and Paul and Linda McCartney, settled down to work, working out musical ideas and rehearsing in a barn adjoining the farmhouse.
“It’s not a studio – it’s a barn.” Said Denny.

Did it have sound proofing?  Recording equipment? Tape decks?  Mixers?

“No.”  said Denny, “It’s just a barn.  And then some days when the sun was shining, we’d go outside and rehearse in the open fields, with just the fields and the sea around us.

“I bought a Land Rover so that I could drive up to Paul’s farm, which is really hilly; you have to drive over boulders to get there.  My Land Rover is over at the farm nearby which Danny is renting and where I’ve been staying up there.”

Danny worked on McCartney’s “Ram On” album, and now since Denny joined them the four musicians have laid down enough material for another album, too; they record it at Paul’s own studio in Scotland.

“People might get some wrong ideas about this,” said Denny quietly in answer to one question.  “It’s just a normal farm up there.  Paul gets up in the morning, and goes out on his tractor, growing his vegetables, which Linda cooks.

“Paul is just a farmer who plays guitar – he’s not a Beatle any more.  He lives off the land.  He grows all his own food, and I think they’re vegetarian.  Apart from his crops, all he’s got up there on the farm is horses and sheep.  Paul knows he has to give a lot of his time to music, but he wants to get away from it sometimes.  We all do.  He’s growing his own crops and potatoes and turnips and parsnips, and it’s all very simple.  Every day the food is fresh, which is what food should be.
“Linda is a real woman:  she’s busy in the house and she’s a good cook – and she looks after their home, and looks after their children.  And although she’s only recently been working hard at it, everyone’s going to be very surprised when they find what a good pianist she is. 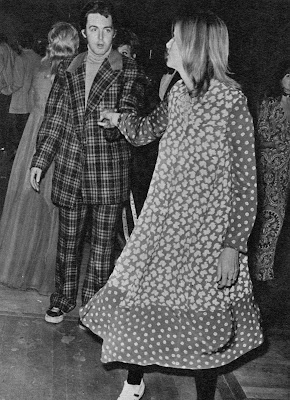 “She and Paul  sing together, and write together, and yet she still finds time for her photography.  Yes, she’s a real woman…  We all had a break last year, while Linda had her baby.  Then we went back to Scotland to record some more music for the Wings album.  In the meantime I’m finishing off my own album.”

This will be released on the Wizard label, which is run by Tony Secunda, who’s Denny’s manager:  they have been friend since the early sixties when Tony was associated with the Moody Blues.  Tony now always manages T-Rex.  Denny leaves all his problems to Tony – which leaves him free to be a true musician.

“You can’t have ulcers and then play music,” says Denny.

We sit talking about the details and the music:  about Denny’s writing and their search for a name.  “We had letter suggesting names to us, and it took ages to think of Wings.  Paul’s been saying that he’d like me to feature some of my own songs on stage as well as the ones he and Linda have written.  We’re still working everything out:  on some tours we may use strings and on others, brass.
“But at the moment, we’re just working on the basis of the group, which is the four of us. It’s all very much a family thing, which is the only way it can work for a group.   Any group has to have this family thing.  To be in a group, you don’t have to be Beethoven—you just have to be capable person who can work with other musicians.

“And that’s what Linda is:  she’s a capable person, and she’s bound up in everything Paul does.  She wouldn’t be married to Paul if she wasn’t interested in what he did.  She’s been playing the guitar a little bit lately, as well as piano, and she sings really well.  But she’s really a country type of person, brought up with horses and very down to earth.  She’s a very strong woman.  A typical farmer’s wife. “
Posted by Sara S. at 12:13 AM