It was 58 years ago today -- on August 29, 1959 that the band known as the Quarrymen first played the Casbah.    You are all familiar with the photo --- John and Paul are rocking it out.  John's head is down and Paul is looking loving into the eyes of Cynthia Powell.   Next to Cyn is a girl and on the end is a fellow. 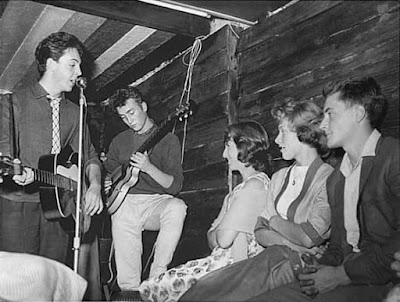 The girl next to Cyn is named Val.   No one seems to remember the name of the boy on the end.  But Val had quite a time in Liverpool in the late 1950's and into the early 1960's.   She worked as a coat girl in the Cavern during those days and so she had the opportunity to see the Cavern turn from a strictly jazz club into a beat club.


She explained in an interview in 2014 with the Montreal Gazette:  “All the Cavern girls who were working would take turns coming out to watch and listen from the middle cloakroom,"

Val liked the guys in the Quarrymen/Beatles, Gerry and the Pacemakers (she briefly dated Gerry) and her favorite band was the Blue Genes.     She started to date John from the Blue Genes after he dedicated the song "Oh you Beautiful Doll" to her at the Cavern one night.

She continuted to work at the Cavern, watch the bands and date John until he told her the news that his day job was taking him to Canada and he was going to leave Liverpool.      After some consideration, Val decided to follow him.    There was a little "goodbye" to Val at the Cavern and Paul McCartney dedicated and sang "Til There was You" for Val as a final goodbye.

The couple was married shortly after this and have been married ever since!     Just a little aside--do you know who was hired to take Val's place in the coat room?  A girl named Cilla White got the job, but she soon was to be known as Cilla Black.