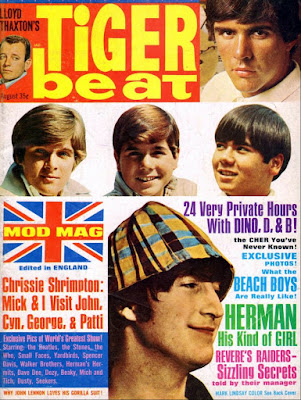 Tonight on the Wednesday Review I am going to review a book that ended up not being about the Beatles at all.   When I purchased the book, Meow:  My Groovy Life with Tiger Beatle's Teen Idols by Ann Moses and Ann Wicker,  I knew it wasn't going to have complete Beatles coverage, but I thought there would be some.     So right off the bat, I want to let readers know that besides just a passing few words here or there, the Beatles aren't in this book.

Does that mean I don't recommend Meow! to all of you?  Not one bit and let me explain why.   Ann Moses was a typical teenage girl in 1966.   She loved all of the British invasion groups and she had asperations to be a writer, even though she was working at the orange juice counter at Disneyland.   She saw the Dave Clark Five in concert and managed to interview them for her college newspaper, which lead to writing for a small fan magazine which then got the attention of the up-and-coming Teen Mag, Tiger Beat.      It wasn't long before Ann was working for Tiger Beat and fulfililng the dreams of every American teenage girl.

I am sure you all remember Tiger Beat.    It was the hipper version of 16 Magazine.    It was aimed towards pre-teens and early teenage girls and would have glossy color pin-ups of your favorite goregous stars of the day.    They also had some wild stories of fans meeting these hotties as well as advice colums and contests.    Tiger Beat always painted a rosy picture of the stars, but seemed still have more edge to it than 16.

Ann tells her story in this autobiography of interviewing all of the big named stars of the late 1960's and into the 1970's:   Paul Revere and the Raiders, the Monkees, Desi Arniz Jr., Herman's Hermits, Bobby Sherman, and David Cassidy were all famous people that Ann spent a lot of time gettingn to know and wrote about for the magazine.   Ann is very honest and tells us who among the famous were super sweet and who among them were rude.    She doesn't report this in a mean or gossipy way, she just states the facts.   And through it all, you get an interesting idea of what it was like to write for a Teen magazine in the 1960's.

Ann falls in love with one of the big named stars (you will have to read the book to discover who it is) and she suffers quite a heartbreak.    I couldn't help but feel so badly for her during this part of the book.     What I liked about Ann was that she could have turned herself into a groupie and slept with some of these rock stars on tours, but she did not take that route (with the rare exception of the one star that she fell in love with) and still was able to establish relationships with them in order for them to open up enough for her to write the stories that the teenagers of America wanted to hear.


I really enjoyed this book even though it wasn't at all what I expected.    I found myself laughing and swallow tears all during the book.    I also liked the fact that the print on the page was large and easy to read.   So many books I have been reading lately have tiny print, so this one didn't strain my eyes.

If you read Tiger Beat or any Teen magazine back when you were a teenager, then I really think you will enjoy this book.      It was one of the better books I read this summer.