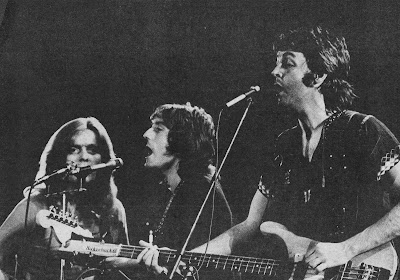 Note:  I translated this from Dutch using Google translate and tried from there to make it make sense.  My apologies if it doesn't.

It's over. Paul McCartney is with his new band, Wings. An ex-Beatle is always good for a crowd of visitors, who might not even come for Wings but more out of nostalgic considerations

Soon, Wings turned out to be a moderate part of what once the great Beatles were. Paul's wife Linda stood up to the podium and was musically a farce.  With the emphasis on her own composition, "Seaside Woman" it  was the bottom line of the performance.  Occasionally, McCartney reached old heights. The number '882' for the new LP was a splendid example of that.

Paul still appeared to have a particularly impressive voice. The band has not played together for very long. That was seen by the example of Henry McCullough's "Henry's Blues" composition where Henry was a God-fearing one.

Also the singing was often not so great. Overall, it was hard for me to digest that there was a quarter of what once was and that cannot be calmed down. The world's best songwriters were a duo. What Paul McCartney wants is not clear. Is this group a kind of hobby? It's hopeful. It will be a matter of waiting. That patience must be bought and Paul can always stand on a big backdrop from his Beatle past.

We tried to have an interview with Paul.   Attempts to reach him in his temporary Dutch residence in Oud Wassenaar Castle did not matter. Paul was behaving like a bad child in his room.

Our English correspondent did it and he sent us his conversation with Paul in South France:

Q:  Paul why did you start your tour in such a small town as Château Vallon?
Paul: We were supposed to start somewhere in a tiny place and Chateau Vallon was excellent. It is small, quiet and is not on the Grande Route.

Q:  Linda, were you nervous for the performance?

Linda:  Just for the first half though. The second half was better.  The first half I was rather nervous because we had no sound control, but we did not repeat that.

Q :  How do you feel working with someone like Paul?

Linda: I learn a lot. It's nice too and it's a bit different.

Q:  During the performance, you played a few songs from your new album. When is that expected to be released?

Paul: We have now recorded about half and it's supposed to be ready by winter, so it will hopefully come out by the end of the year.

Q:  Did anyone tell you that 10 years ago the first Beatle record came on the hit parade?

Paul: How do you mean?

Q:  Do you still think about that time?

Paul:  Of course. I also have good memories of my school time. I found it all great, but it does not bother me anymore. It's over. Life goes on. You have to continue, you know.

Paul: Well. It's about the Beatles. About John as a companion. Now I have Linda as my other writing half.  Many people were afraid when we broke up. There were a few lawsuits and now it's over.

Q  Paul, do you have a hangover to the past?

Paul: I always have that. I think most people do. I mean this. You have a party where everyone has a bit of a shot, like a New Year party or party we had in Liverpool where the whole family is together. This year we had a great New Year's party. My uncle Joe was there with his son-in-law. Both put on a nice suit.   They were arm in arm and singing.  I like such scenes.

Q:  Would you ever play a Beatle number?

Paul: I do not know.  Maybe. It is nice for the public; because they can sing the songs. For the first time, I recently played "Yesterday” with an acoustic guitar. I then played more old songs.

Q:  What do you think is the best song you ever wrote?

Paul: "Yesterday." I think that is a complete song. Not because it just happens to be a big hit. It is one of those songs I wrote when I got up one morning. I do not know if you know, but there are people who dream of complete symphonies and when they wake up, they cannot write it down. I had that with "yesterday." I could just write down the melody. It stayed with me in my dreams and when I woke up, I scraped everything and wrote it.

Q:  Do you feel today that people expect that type of a performance from you again?

Paul: Yes. But the only thing to live with is ignoring it. It's not a good idea to sit down and get depressed by the pressure of others. It is normal to be affected by those feelings. Everybody has.

Q:  What would you like to do besides Wings?

Q  Does that interest you because of the "Yellow submarine?"

Paul: No.   It is because I have to deal with children. You read to them and think, ‘hey that's good’ and ‘say that happened to me’. To be precise, it was because I was reading something with Heather.
Q:   Some have suggested that you have lost your sense of musical direction.

Paul: Maybe. Maybe not. If you stop a band and you continue with another, you will lose that time. But if you want to know the truth:   let my contract expire! Just like the other three. However, that does not mean Allan Klein and the others are against me. It's not fun, but once again it's okay.

Q:   Are you against the other three?

Q:  Do you still musically do what they do? Do you listen to their music a lot?

Paul: I following it but rarely listen to it.

Q:  What do you think of John's last album?

Q:  Do you not share his political and social ideas?

Paul: Yes. It isn’t effective.  I don’t think what he is saying it wrong.  It's reasonable. Much of what he says is true.

Q:  Have you been invited to the Bangla Desh concert in New York?

Paul: Yes, I'm invited. But that's a long story. I want to say this. If I had done it -and maybe this sounds ridiculous- but many people would have said –‘Hey, the Beatles are together again’ - even if it was an evening.  It is over. Definitely.  If you're going to play together again, people will come and say, "Well, boys will do this a year later." A kind of 'In Memoriam' album will be available. Well for something like that, I am thankful that I’m not dead yet.  When I am, they can make one, but not now.
Posted by Sara S. at 12:06 AM