When Joan met the Beatles 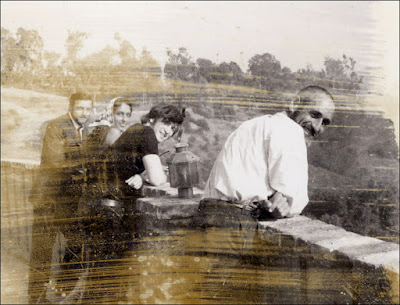 I traveled with the Beatles for four days on one tour and, uh, ended up with John at one point, but we certainly did not have anything...I mean, it was  wild times.  This was their first or second trip to the States -- the second I think.   I was performing in Red Rocks, above Denver, and they were on the next night, so I stayed over.   There I was in this room full of hundreds of people, all scrambling around trying to figure out how they could get to their dressing room, and somebody came up and said, 'The Beatles would like to meet you."  and I just instantly went to jelly.   I got to their door, trying to think of something clever to say and finally just put out my hand and one by one they introduced themselves.   Now, they had been on the cover of every single newspaper for months, and they're going, "Hullo, I'm George" and "Muh name's Ringo."  I said, "Yes, I know."   They were terribly funny and terribly sweet, and they invited me to stay on the road for their last three or four concerts.  My tour was over, so I went with them -- as I think anybody would have.  You know, packed everything and whoopty-do, off we went.  I saw all the inner workings:  how you climb into  Volkswagen buses and then send the limousine out to be beaten to death by loving fans.   All those things.  I was fascinated.   Then we ended up in this great big mansion in Los Angeles that somebody had given them.  But big as it was, there wasn't really enough master bedrooms for everybody.  and poor John was the one who had invited this little Mexican waif along -- I don't know what the hell they thought of me; they thought I was Florence Nightingale because I used to tend to the wounded at their concerts.  Anyway, so here we are in the mansion in Los Angeles, and we've run out of bedrooms, and they've sent their people out to bring in groupies so they can pick who they're gonna, you know, hang out with.  And these poor girls, just sitting downstairs waiting to see whether they're gonna be picked by somebody -- they don't talk, they don't even knit.  They just sit there in these little outfits that they've worked on for months waiting for this thing to happen.  And eventually a Beatle will come by and pick one of them and, you know, drag her off to his lair.  There was also a hotshot local somebody.  I didn't figure out exactly what she was, but she looked like a professional prostitute.  Anyhow, John was stuck, having invited me and then not having anywhere to put me.  So he offered me his room; it had a bed in it the size of a small swimming pool.  I said, "Well, John, don't worry, I'm not fussy about these things, you just come in and use the other side of the bed when you are tired."   I didn't want him to feel pressured, 'cause I figured they must feel pressured to perform all the time.  So I went to sleep, and he came in, in the middle of the night.  And I think he felt compelled - "Well, I've asked her and she is a star and oh dear..."  and he started coming on to me, very unenthusiastically.   I said, "John, you know, I'm probably as tried as you are, and I don't want you to feel you have to perform on my behalf."  And he says (adopting Liverpudlian accent), "Oh, luvly!  I mean, what a relief!  Because you see, well, you might say I've already been fooked downstairs."   So we had a good laugh and went to sleep.