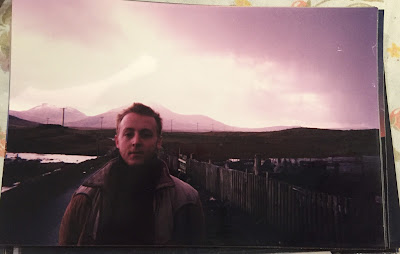 If you are a frequent reader of this blog, then you will know that I am a fan of James McCartney.  Not just because he is the son of Paul and Linda (although that does play into it), but because I genuinely like his music.    I have seen him in concert twice and this past Easter, April 16, 2017 I saw him perform for the 3rd time as part of the "Marshmallow Maiden" tour at a coffee house/bar called Foam in St. Louis, Missouri.

My mom and I were early for the concert and they weren't opening the doors quite yet, and so we waited with a few others outside of the door.    It wasn't long before the door opened up and out walked James McCartney!    He said "hello" to all of us and I said "Hi James."  He and a woman walked around the area together.    Meanwhile there were many panhandlers out on the street and I saw at least one of them approach James, asking for money.


I didn't see James get back into the venue because the door opened and we went inside.   I decided to use the restroom.   It is a very small place and there is only one uni-sex toliet.    There was already someone in the restroom, so I waited outside the door.   Guess who comes behind me to use the restroom?   James McCartney!!   I am waiting in line for the loo with James McCartney.    I tell him that I follow him on Twitter and that I enjoyed the video he posted that showed him making the tour posters.   He thanked me.   Then the door opened and whoever was in there came out.   I said to James, "You can go ahead and go if you want."   And he said to me, "No, you can go."    Very surreal!

Onto the actually concert.    It started with an opening act.   I have no idea who these guys were because they never said their name.   I wonder if James has any clue who will be opening for him.   Whoever these guys were, they were pretty entertaining.   Their music wasn't bad (but it was super loud for a small venue).   The lead singer took off his shirt and was literally jumping all around and climbing onto the amps.    At this point, about 50 or so people were in the room. 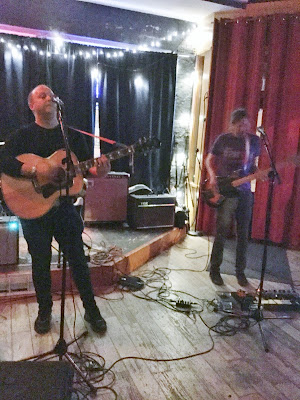 This is the third concert I have seen of Jame McCartney over the past four years.   This one was by far the best concert of the three.   James has always been extremely talented, however his interaction with the audience has been lacking.    Things were much different this time around and it has been really neat to see Jame grow as a performer.

One big difference on this tour is that James has another musician playing with him, Steve.   Steve made a WORLD of difference!   He played the bass guitar and sang backup.   Not only that, but Steve would talk a little between songs and get James into talking as well by asking him a question or saying, "why don't you introduce this one."    This made James MUCH more relaxed and he seemed to open up a lot more than he had before.     He would ask how we were doing and chat a bit between songs.   It was a nice change. 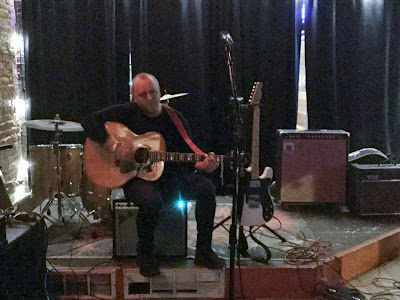 James sang songs from his Blackberry Train album and a few from his EP set and JaMEs McCartney.  I am glad that he brought back his cover of "Old Man."   He opened with "Too Hard" which is a great song!    Other favorites that he performed included "Ring a roses,"   "Peace and Stillness,"  and "Alice."    He performed two songs sitting at the piano.

Here is something funny that happened during the concert.    James played the piano that was at the venue.   It was up against the wall and my mom was sitting in a church pew that was up against that piano.    So she was right next to hm why he sang at the piano.   He was singing a great song, "Prayer," and gets to this point in the song that goes "makin' love to you..."    He looks over at my mom and she makes a "who me?" type of gesture and he laughs in the middle of the song!   And people say he never smiles or laughs!


After the concert James and Steve went out to sell merchandise and meet people.   I bought a print of one of James' artwork and both of the guys were happy to pose for a picture with me. 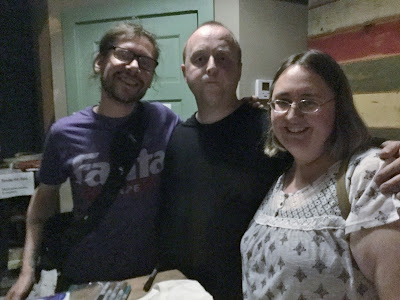 I told James that we see him anytime he comes to St. Louis and we hope he comes back again soon.
It was a great night!

The Marshmallow Maiden Tour will continue for another month throughout the United States.   James is a great musician who has came a long way from his first tours several years ago.   You can't help but think of both Paul and Linda when you look at him.        Take the time to see if he is coming to your area and go see James-- you won't regret it!

*all photos but the top photo belong to me, Sara Schmidt.  Please do not post them without my permission.
Posted by Sara S. at 11:39 PM