The Birth of the Beatles -- A Book Review

When Sam Leach passed away at the end of last year, I realized that while I was familiar with Sam, I really didn't know very much about him.   And so I found a copy of Sam Leach's 1999 book "the Birth of the Beatles" and read it over the past few weeks and found out all about this fascinating man.


Sam Leach was the best promoter in Liverpool in the early 1960's.    His clubs might have strived for a short period of time and then failed, but the man knew how to get the kids into the clubs to see the bands.   When Sam Leach promoted a concert, you could guarantee a large profit for the night.    Sam would do a variety of "Big Beat" shows in Liverpool at places like the Iron Door or the Tower Ball Room where all of the top Merseybeat groups would play sets overnight for a huge dance party.    The Beatles, Rory Storm and the Hurricanes, Gerry and the Pacemakers, etc. etc were all there and hundreds of young adults from the Liverpool area would spend the night rocking and rolling.

By being such a strong promoter, Sam devolved a friendship with the Beatles.   He could joke around with them and would give them a hard time and they would give it right back to him (usually Lennon naturally).      One thing I didn't know, was that sometime he would have groups combine when not all of the band was able to make it.   So in March of 1961 at the Iron Door John, Paul and George  performed with Rory Storm to make "Rory Storm and the Wild Ones" during lunchtime sessions.  Now that would have been a performance to see!


Sam was always a Beatles fan.   He talked about something that must have been true, because I have read it time and time again in books about the early days.   He said that when the Beatles performed, the dancing suddenly stopped and everyone just stood there in a trance because the Beatles were so good.    And Sam believed in the boys right from the start.   He knew they were going to be big, and told them so.

As time goes on, Sam keeps losing clubs and opening up new ones.   Either Sam wasn't always good at running a business or he was a guy that just had terrible luck.    He watched as the Beatles got more and more popular in Liverpool.

And then Brian Epstein came along and Sam says the Beatles changed.   They were no longer rough around the edges and were missing something.     Sam does not paint a pretty picture of Brian in this book.   He makes Brian look to be a petty, snobbish and shrewd manager that controlled the Beatles and did whatever he could to push Sam out of the picture.   Maybe Brian was afraid that Sam was going to take over as manager?   And why Brian does not come out looking like the good guy in this book, Sam was quick to say that without Brian the Beatles would not have become as popular as they did.  That Brian single handedly took them from Liverpool to the rest of the world.

Sam had some great stories.   The entire story of his first night having an all night concert is great, but there is a part where they keep losing Ringo (who was with the Hurricanes at the time) and they keep finding him asleep behind an amp.      The story of Aldershot and the 18 people that came to see the Beatles perform is a classic.   What bad luck!    The ad didn't get in the newspaper to let people know about the show because the newspaper was waiting for Sam's check to clear.   Then to make things worse, the weather got really bad and it was dangerous to get out.    So 18 lucky people got to hear a Beatles concert.   Crazy when you think about it.     Also interesting was that Sam said at his engagement party, he watched Brian chase after his fiance's sister all night, making him believe that Brian was bi-sexual.


What I really liked learning about was something that has always been a mystery to me.   For many years I have had in my collection a magazine from 1964 called "The Beatles on Broadway" that featured great photos of the Beatles in America in February 1964.   In big letters on the cover is "Sam Leach."   I knew Sam didn't travel to America with the Fab 4, so how did he get involved with this magazine?     As I said, Sam was a Beatles believer from the beginning and when he heard that they were traveling to America, he knew they were going to make it big.   And so before they left, he got a deal with UPI to the first rights to the wire photos that came across from that tour.    He bought them pretty cheap.    So he had all the rights to these great photos and he put them together for one of the classic Beatles magazines ever. 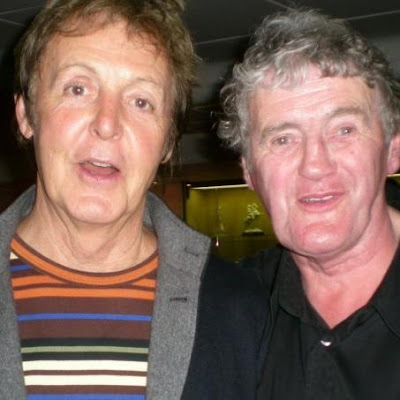 Overall "Birth of the Beatles" is a good book.   I found it to be a little slow in some spots and I was tempted to skip over sections because it wasn't holding my interest, but then things would pick up again.    Also I wasn't totally sure how true some of the stories he told were.   Was it really Sam Leach's idea to have 10 minutes of silence in memory of John after his death?      But over all it was a great look at the Liverpool club scene in the early 1960's and the important role the Beatles played in that scene.