The Beatles are Finished! 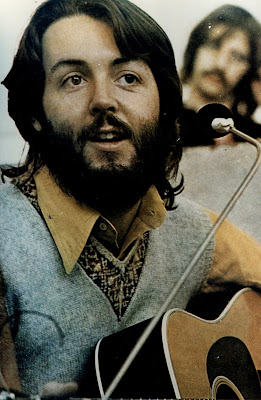 Yesterday marked the 47 years since newspapers around the globe informed us that Paul had quit the Beatles.   At the time, the announcement was confusing and some fans were in denial that the Beatles were over for good.  Surely they were just going to do some solo projects for awhile and then get back together as the Beatles, right?    Of course fans did not know at that time about the law suits that were about to occur.

Here is an interesting story that I found in that scrapbook.   I am unsure of the date.


Paul McCartney, in his first magazine interview since the split, tells FLIP's Keith Altham...
"THE BEATLES ARE FINISHED!"

The Beatles and FLIP have always been close.  The first magazine FLIP editor-publisher Steve Kahn ever published was all about The Beatles.  Keith Altham, FLIP's London editor, has long been a close friend of Paul, John, Ringo and George.  And Linda Eastman, now Linda Eastman McCartney was a photographer for FLIP long before she met Paul.

Because of this relationship with the world's most incredible group, FLIP was especially saddened when the break between Paul and the others came  And, deep in our hearts, we believed that, someday, somehow, the Beatles would get back together again.  We believed it until the other day, when Keith Altham cabled this story from London.


"The party is over -  but no one really wants to announce the finish of an institution,"  says Paul.  "I didn't leave the Beatles -- the Beatles left the Beatles.  First Ringo left during our recording of the "white" album because he said it was not fun anymore.  Then George left because he thought we were not saying enough on "Abbey Road."   John fell in love with Yoko and out of love with the rest of us."

The real split of the Beatles' relationship occurred almost 18 months ago, in spite of the fact that their work has been individual efforts.

"It just became impossible for me to work with Yoko sitting there watching us," says Paul.  "I wanted tow rite simple things like 'I love you girl' and every time I knew she was listening I felt I had to come out with someone clever and avant garde!

McCartney physically left the Beatles almost a year ago when he retired to his Scottish farm and refused to talk to the press for over 16 months.  He had said his bit on behalf of the Beatles, made their excuses, met the verbal demands and charmed the journalists out of the trees for six years.  He had only things to say on behalf of himself and was not prepared to say them while the body of the Beatles still twitched.

Another major difference of opinion arose over Allen Klein being appointed their business manager.  "I don't think we need a manager in the sense that Brian Epstein was our manager," said Paul.  "All I want is paid advisers who do what I want them to do.  I never signed a contract with Klein nor do I intend to do so."

In one sense it might be true to say that the other Beatles left the group long before he made his statement.  Paul felt the group was losing their reality and wanted to make live appearances again as long ago as last autumn.


"I felt we would never get back to the stage of playing good music again until we started behaving like a live band," says Paul.   "I suggested to the others we make unscheduled appearances in little village halls - just close the doors after a few hundred people were in.

"John's reply was that I was daft!"  He then said he wanted to leave the Beatles and wanted an immediate divorce.  None of us really knew what to do about the situation, but we decided to wait until our film 'Let it Be' came out in April.  I got bored and made 'McCartney' instead!"

Paul's solo album came about almost as an accident, he recalls:  "I'd just got a new recording machine in my London house and found I liked recording on my own -- playing all the instruments.  At first it wasn't going to be anything serious.   I had not enjoyed myself as much since the early days of the Beatles.  I haven't really enjoyed the Beatles these last two years."

The Beatles dead?  It seems almost impossible to believe but when you realize the four of them have not been in the studio together since last August, it becomes a reality.  The group which was the standard bearer for Western Youth has abdicated and the throne lies vacant.