This past weekend I had a great time at the Fest for Beatle fans in Jersey City, NJ.    I spent most of my time behind a table where I was selling my book and photographs.    I want to say "thank you" to all of the people that stopped and said that they enjoy this blog.   You have no clue how good that was to hear.    While I have always done this blog for my own enjoyment, it is really amazing to see the faces of the people that actually share in this adventure with me.

It was a thrill of a lifetime to see my name and photograph in the Fest program and to go up on stage and sing along with the "Hey Jude" finale.

I had a great time at the Fest.   If you haven't been to one or haven't been in a long time, I really want to encourage you to give it a try, if even for just one day.    Yes, the Fests are very expensive and sort of commercialized; however it is really one of the few chances you get to talk in person to other Beatle fans.   There is a real feeling of peace and love and just a great vibe that you won't find anywhere else.     Think about it and I hope to see you there!

Here are my 10 favorite things about the 2017 Fest for Beatles fans in Jersey City, NJ.


10.  The hotel and the view from the hotel.
This year the Fest was held at the Hyatt Regency in Jersey City, which is located on the Hudson.   From one side of the hotel, you could see the Freedom Tower and the New York skyline and from the other side you could see the Statue of Liberty.   This was only my 2nd Fest on the East coast, but from what I have been told, this hotel was a huge stop up from the previous venues.    The staff was very accommodating and I really enjoyed the hotel overall.

I listen to a lot of Beatles podcasts.   There are so many that are excellent and it is hard to choose just one to call a favorite.   However, one of my top 5 Beatles podcasts is "Fabcast"  with Howie Edelson, Stephen Bard and David Morrell.   It is a pretty deep podcast and is worth checking out.    In the past, the live podcast discussions have always been one of my favorites to watch and the "Fabcast" session I went to was no exception.      Howie and Bard were on hand and discussing Paul and John in 1980 and how they inspired one another.   It was a really good discussion.


8.  Sgt. Pepper Party (honoring Brian Epstein)
On Saturday night, there was a party and everyone was encouraged to come dressed in their "Swinging '60's" garb to celebrate the life of Brian Epstein.     It was a little bit "out there" for my taste, with some strange poetry being read, but it was all in good fun.    The best part was the reading of the "5th Beatle" script. 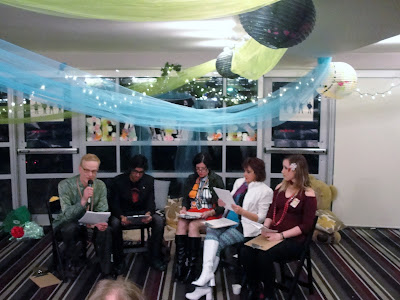 7.  Meeting Facebook Friends
I lost track of all of the people that came up to me and said, "We are friends on facebook."    Some of them I  have had really long conversations with over facebook messenger and others I barely knew.  However, it was awesome to meet everyone in person.

6.  The unexpected mini Wings reunion.
Wings drummers Denny Siewell and Steve Holly as well as guitarist Laurence Juber were all announced to be guests this year at the Fest.    Once the weekend got underway, Denny Laine showed up unannounced!   I am not sure if he was a surprise planned guest or if he just appeared on his own and decided to join in.   However,  the four Wings members sang a few songs and it was really awesome and unexpected. 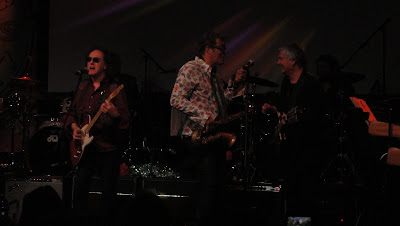 5. The stories I heard!
As I said, most of my weekend was spent behind a table.    So many fans came up to me and started telling me the funniest and wildest Beatles stories!    I spoke with a woman who went to middle school with Nancy Shevell,  a woman who saw the Beatles in concert in Boston and after their limo drove by, she saw a cup sitting in oil on the driveway and she figured that oil came from the Beatles limo and so she scooped it up with the cup and took it home with her, and a man who hung out at the Dakota in the 1970's and one time with John and Sean returned home from the circus the driver of the car gave this fan popcorn kernels from John's popcorn from the circus.     And so many more little things----it was really fun for me to hear because I just love those stories.

4.  Panel discussions
I was on two panels and gave one presentation.    One of my favorite panels was a discussion on "who was the 6th Beatle."    Now in order to be considered a "Six Beatle" person, that means you aren't ever considered in the "fifth Beatle" category.  Therefore folks like Brian, George Martin, Pete Best and Stu are out.    Who did I ague for?  Can't you guess?  Mal Evans.


3.  Meeting Klaus Voorman
I actually met Klaus at a Fest in Chicago in the early 2000's.  He signed my Revolver album.   I always had regrets that I didn't get a photo taken with him, and so I fixed that this year.  I purchased his Revolver book (and had him sign it) and sat down next to the one and only Klaus Voorman for a photo.

On Friday night, we had the amazing opportunity to see the world premiere of the new documentary about John Lennon called "Finding Lennon."    The film isn't quite finished yet, but let me tell you---whenever it is, you have to see it!    I wasn't expecting to be blown away by this film because---ANOTHER John Lennon documentary?     But this really was a fresh and fair look into John's life from birth to teenager.   Interviews with friends that John went to school with were shown and they told stories that none of us had ever heard before.    I am going to do a full review of this film once it is official available.


1.  Leon Wildes
I can't speak for anyone else, but the single best thing of the Fest for me was hearing Leon Wildes talk on Sunday afternoon.   I actually left my table and stopped trying to sell books in order to see Leon talk.    As you will remember, Leon Wildes was John Lennon's immigration attorney.    He single handedly was the person that got John Lennon his green card and allowed him to stay in the United States.   I was able to shake the man's hand and tell him thank you for all he did for John and Yoko.     Hearing Leon speak was very emotional for me.

Overall I would have to give this year's east coast Fest an 8/10.     I personally enjoy the Chicago area Fest a lot more, but that could be simply because it is the one I have attended for over 20 years and I am familiar with the faces of the people.
Posted by Sara S. at 11:19 PM