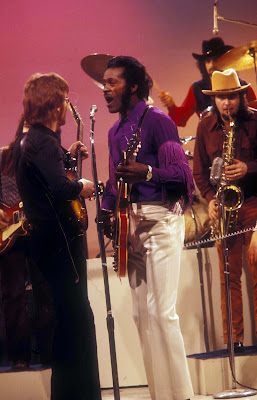 The Beatles and Chuck Berry have a very long history.    Being a St. Louis area gal and a fan of early rock n roll, I can't help but love the music of Chuck Berry.    Johnny B. Good,  Rock n Roll Music, No Particular Place to Go, and My Ding a Ling were songs I remember hearing over and over again during my life.     And growing up in this area, I was always hearing about Chuck Berry on the news.


The Beatles first heard of Chuck Berry way back in the 1950's while they were in Liverpool and all four of them automatically loved the music.   Chuck Berry was the root of Rock n Roll for them and paved the way for all four Beatles to become the musicians that they were.

As I am sure you have all head, Chuck Berry passed away yesterday and the age of 90.    He lived a very full life.   While I can't always agree with things that happened in his personal life, that doesn't stop me from enjoying his music and appreciating the impact he made on the Beatles.


John and Ringo (along with Cynthia) saw Chuck Berry perform in concert at the theater Brian owned in February 1967.  As far as I know, that was the first time any of the Beatles actually met him.

In 1972, when John and Yoko performed on the Mike Douglas show, John had the idea of having one of his childhood rock n roll heroes perform each day of the show.   He picked out a list of rockers, but Chuck Berry was the only one that could make it.   And so John and Chuck performed (even if it was in the wrong key for John) on television in what was one of John's must nerve wracking and exciting moments.

Paul met Chuck backstage at Busch Stadium in 1993.   They had a vegetarian diner together before the concert and Linda gave him a copy of her cookbook.

While I think Ringo and George must have met Chuck at some point, there isn't any record of it and there aren't any photos that I could find.   But it just seems like their paths must have crossed at some point in time, don't you think?

I actually did a lot of research on the Beatles and Chuck Berry for my book.  So if these stories interest you please order my book at www.stlbeatles.com

If you are ever in St. Louis---make sure you drop by Blueberry Hill and pay your respects to Chuck Berry.   He will be always remembered for being a great guitarist and one of the founding fathers of Rock n Roll.   Thanks Mr. Berry!
Posted by Sara S. at 10:45 PM