This has to be one of the biggest pieces of rubbish I have read in a long time.   Whoever wrote this piece did not do her research.   John sued the other Beatles because he thought he was the one with the talent?   John and Yoko's marriage ended?    A ton of other crazy things in here.


So why am I posting it?   First of all, I think historically it is interesting to see what was being written and why fans believed certain rumors.   I also think the story about the Troubadour club is an interesting perceptive because it wasn't John's side of the story, but just a basic telling from an observer type perceptive.

You know john Lennon.  The ex-Beatle?  Ringo Starr was the devilish little imp; Paul McCartney was the “cute” one; George Harrison, the mystic, Lennon?  Lennon was the troublemaker, the home-wrecker, dope-addict, drunk, child-and-wife deserter, outspoken atheist (remember, “The Beatles are more popular than Jesus Christ?), rebel and crank.   According to some, he was the only certifiable genius in the group.  To others he was just a certifiable madman.

Things didn’t change after the break-up of the most popular and influential rock group, either.  Each of the four went their separate ways.  Ringo recorded a few albums – nothing much artistically, but they were fun and they made him an awful lot of money.
Paul McCartney married Linda Eastman and moved to a farm in Scotland.  They lived there in love and comfort, returning to London only to make recordings or engage in court battles with John Lennon- but that comes a bit later in the story.

George Harrison traveled to India to study with the masters of both the sitar and religion.  He devoted a great deal of his time to charitable causes and made recordings where were well received by the critics, if not so well received by the record-buying public as those of Ringo and Paul.
John Lennon kept on getting into trouble and offending as many people as he could.  He had already angered most of his public by deserting his wife and children to take up with Japanese avant-garde artist Yoko Ono.  They recorded one album together, and posed nude for the cover.  Naturally, it was banned in the United States.  People began muttering that the man would never grow up.

Lennon then instituted a suit again the other three ex-Beatles, claiming that he had been the real talent of the group and that the group’s manager, Allan Klein, had been hired over his objections.  He wanted the partnership dissolved forever, with income adjustments made to compensate him for his work.  People said that he—and his new wife Yoko Ono – were responsible for the groups break-up in the first place.  He was resented for the implication that the other three Beatles had been only backup men for his skill and talent.  People continued to mutter that Lennon would never grow up, and the mutters were getting louder.

So it went.  While the other three—Paul, George and Ringo- went on about their business of making music, living peacefully and spending time with their friends and families, John Lennon issued inflammatory statements, made revolutionary recordings about Marxism and the workers’ rebellion. He was arrested for possession of drugs, and engaged in a very messy court battle with Yoko’s first husband to get custody of her child.  The mutterings continued to grow.

But the incidents of last July, at the Troubadour café in Hollywood, seemed to be the capper.  Lennon, accompanied by singer/songwriter Harry Nilsson and his secretary, lovely oriental May Pang (he had separated from Yoko by this time) was attending the opening of the Smothers Brothers’ newest comeback attempt.  The party was seated at a table next to the stage, as befitted two recording industry giants, and settled in to enjoy the show.  Unfortunately for the rest of the distinguished audience (including Paul Newman, Flip Wilson, Helen Reddy, Lily Tomliln, Peter Lawford, Judy Carne, Leonard Nimoy, Cliff Robertson and Dina Merrill).  Lennon’s idea of the proper way to enjoy a show was to insult the waitresses and guests, and heckle the performers.

The Smothers Brothers, of course, are old coffee house veterans.  They are not easily heckled, and they also had a pretty good idea of who was doing the heckling.  They answered back light-heartedly, and it looked as if the trouble might be avoided.  But Lennon was not going to be satisfied by a few comments and then silence.  He kept up the heckling.

“It was like he thought he and the Smothers were the only people there,” said Doug Weston, the Troubadour’s manage.  “And it wasn’t even very good heckling.”

After Peter Lawford complained to Weston about the performance being put on by Lennon, the restaurant manager accompanied by the Smothers Brothers’ manager, Kenny Fritz told Lennon and Nilsson that if they didn’t shut up, they would have to leave.  Lennon punched Fritz in the jaw, and received three back.  A drink was thrown, which hit an innocent observer in the mouth, and before any further damage could take place Lennon was deposited on Santa Monica Boulevard by three of the club’s bouncers.   He promptly slugged a woman photographer – at least according to her – and chased another down an alley.  Finally, Harry Nilsson managed to get the freewheeling songster into a car, and away they went.

The next day flowers and apologies went out from a suddenly contrite John Lennon to the Troubadour and the Smothers; but it was a bit too late.  The L.A. police were investigating a number of assault charges against Lennon, and the U.S. Immigration Department , already interested in Lennon (at the time of the ruckus he was fighting their ruling that he had to leave the U.S. because he was a convicted drug-user) expressed a great deal of concern in the case.  He made the chances of his being allowed to remain in the country a good deal slimmer by his escapade. 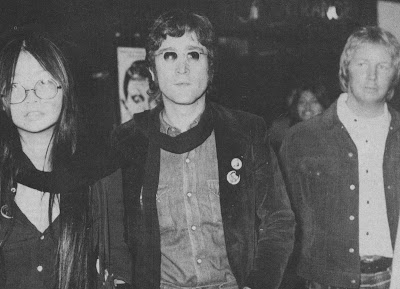 All of that has been straightened out by now, of course.  And Lennon is back in the U.S.A. again, recording and – wonder of wonders – trying to change his image.
He seems a bit bewildered by all the publicity the incident received, although he certainly should be used to the idea by now that his every move is watched and reported on in great detail.

‘What’s funny about that whole thing, “ he said referring to the spate of publicity and the public outcry after the Troubadour incident, “is that all these old showbiz writers are always writing about the good old days when Errol Flynn or somebody used to punch out the press or something.

“They talk about the days when there were real stars and real men who used to be on a yacht with twenty broads and get drunk…and they’d say ow great those days were.

“But then a couple of rockers get rocky one night and all hell breaks loose.  It’s all over the papers.  We even had some people saying the government was right.  That they ought to kick us out of the country.  It’s crazy.”

Many might say, “Look who’s calling the kettle back” when they hear Lennon calling the press crazy.  But he does seem determined to change the notions of him that people have acquired over the years (with his own help unfortunately) .  He has settled his differences with the U.S. government, and has even expressed a desire to live here permanently.  He has ended his marriage to Yoko in an unexpected dignified and civilized manner, and has begun to work seriously on his music again – perhaps more seriously than he has for years.

In fact, he blames the incident at the Troubadour on his desire to work at the time – and the fact that his producer, Phil Spector, had had a serious automobile accident.
Spector’s hospitalization stopped all work on the new Lennon album, and John suddenly found himself with al ot of time on his hands.   He was frustrated in his desire to work and bored by all the inactivity.  To all appearances, he has settled into a much more sedate way of life now that he can get on with his business.

“Now, I’m clearheaded and I’m not drinking,” he says.  “It’s all or nothing with me.  ‘Cause I don’t even like it, actually, I usually drink to escape something – just like everybody.  Everything seemed to be piling up…

“Maybe the pressure is gone now.  That may be the difference.  But then everything was up in the air and must have been affecting me, although you don’t know it at the time.

“You think you’re still functioning.  You don’t’ realize what is happening to you.”

But one thing is absolutely sure.  John Lennon has no intention of blowing it again.  He is settling down, and settling in.  He wants to stay in the U.S. for a good long while.  Maybe the mutters can stop wondering when he will grow up –finally.  He seems to want to be mature, and that is a step in the right direction.

I want,” he says almost humbly, “to show people that I can behave myself.”