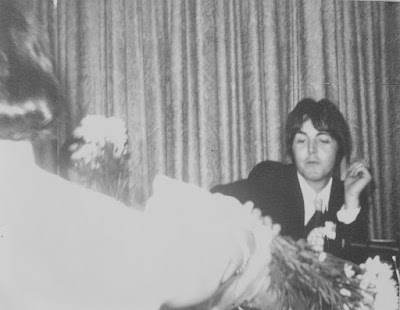 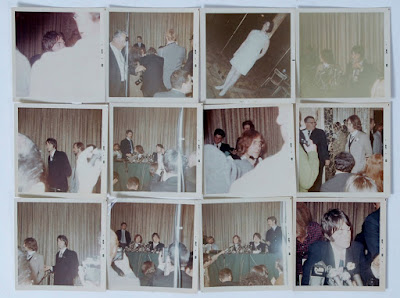 On May 14, 1968, a fan named Claudia (who saw the Beatles arrive at JFK in Feb. 1964 and Paul said 'hello luv' to) was armed with official  press credentials for the press conference John Lennon and Paul McCartney held at the ballroom of the American Hotel in New York City.

She had brought with her a camera, a copy of "In his Own Write" and a bouquet of daisies.

When she approached the table, she was able to hand the flowers to Paul, and he snipped off one of the daisies and put it in the button hole of his jacket.    He also signed her book.   She went to talk to John and he was about to talk to her and sign the book, but at that point he was mobbed by press photographers and Claudia never did get John's autograph.

So now when you see photos from this press conference and notice a flower in Paul's jacket, you will know where it came from!
Posted by Sara S. at 8:00 PM