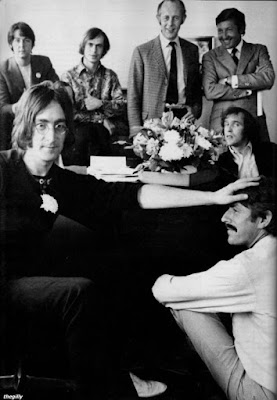 A wire service report form London that the Beatles are going broke has been categorically denied by Ron Kass, head of Apple Corps Ltd.

In a statement to "Go," Kass said that the story was completely fake.  The story said that John Lennon told an interviewer that if Apple keeps losing money at the present rate, they would be broke in six months.

According to Kass, who was in Los Angeles last week, the Beatles and Apple have cornered the market on bad publicity and everything they say is twisted.

"The money is backed up to such as extent it's frightening," Kass stated.  The real problem is that the huge profits from Apple are causing a big tax problem.

Kass made three points to show that Apple is very much in the black.

In the first place, a two-million dollar profit is coming from "Yellow Submarine" to Apple which owns half of the film.

Secondly, The Beatles' royalties from America as of December 31 were over four million dollars.  This is just royalties from Apple which has been in existence only since early last summer.

Thirdly, Apple in America alone has already shone a half million dollar profit on the record company operation.

Kass believes that the false stories originated because teh Beatles have been spending a lot of cash in London lately to acquire property.

For example, they spent about 1.2 million dollars to purchase the building on Saville Row [sic] for Apple headquarters.  They spent another $240,000 for a cutting lathe for the headquarters.

Kass told "Go" that the reason the Beatles are spending so much money is because they have it.

They need to spend a lot for tax purposes - AND THERE IS NO DANGER THAT THEY ARE GOING BROKE.

Nearing completion now, the film may be offered at a later date to other TV companies.

Green also reports that George Harrison and Derek Taylor, press chief at Apple, are planning to write a musical together based around life at the organization's London offices.

They plan to present it in New York next fall, but no details of cast or whether or not any of the Beatles will appear in it are available.
Posted by Sara S. at 4:06 PM