We had stow-aways on the yacht!

We had Stowaways on the Yacht!
By Chris Hutchins
New Music Express

The hue and cry of the Beatles’ fantastic reception in America – on which I reported last week – seemed ten thousand miles away as a millionaire’s yacht name of “Southern Trail” slipped gently through the waters around Miami, Florida, with John, Paul, George and Ringo aboard.  Overhead the sun beat down from a clear sky to raise the temperature of 85 degrees. 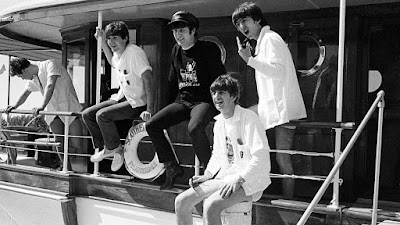 The Beatles were taking the first opportunity they have had to relax since arriving in the U.S. I was the only journalist invited aboard the luxury yacht loaned to them for a day.  “You can carry the cokes,” Ringo had said at the hotel before we left.

However, the captain had had to turn “Southern Trail” back after twenty minutes at sea to put ashore representatives of a Miami paper who had stowed away below deck.

“Funny how all these people have swimming pools when the sea is just at the bottom of their gardens,” said Ringo, as the craft sailed past white-walled houses, which skirted the waterside.
“Well this isn’t Merseyside – they wear mink bikinis here,” volunteered john, as he focused his camera on George basking in the sun.

From inside the cabin, where a mink-covered couch was just one item of evidence to support John’s information, came the sound of music.  Paul was playing a few of his favorite tunes on a piano.
As the yacht made its way past a small beach, someone recognized the “Mopheads”, as the Beatles have become known in America, and dozens of hands waved in greeting.  Many people grabbed cameras to record what they saw - only to discover john and George were already taking picture of them.

I thought how remarkable it was that success has not managed to change the foursome. 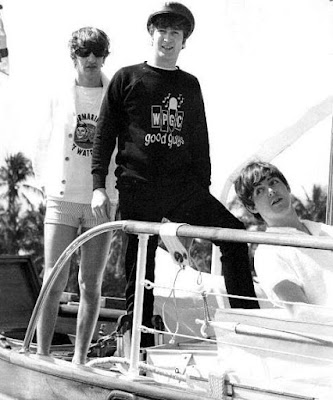 They’re still as down-to-earth and friendly as when I first met them in Hamburg, eighteen months ago.  Frequently in America, I watched them step towards a crowd to sign autographs or shake hands with fans when police had cleared a way for them to make a quick entry or departure from a building.
“Hello, how you doin’? All right?” Paul would say in his friendly Lancashire accent as thousands of American teenagers screamed at the very sight of him and the other “Mopheads.”

Carnegie Hall, where they did two shows, merely underlined the fantastic success of the Beatles.  Socialites and teenagers mingled in the audience, extra seats were installed and the group performed under a rain of jellybeans.  They sang their usual number of hits.

The welcome which greeted them at Miami airport when our plane arrived from New York was one of the most fantastic sights ever seen in Florida, according to a State newspaper.  Thousands upon thousands of their southern fans had turned out to line the tops of airport buildings as far as the eye could see.

And no one was more pleasantly surprised than the Beatles themselves:  “New York and Washington had convinced us that we were pretty popular in those places, but we didn’t expect anything like it down here,” John had told me.

At a press conference soon after their arrival in the resort, the boys had continued their brilliantly funny interviews.

Many of the gags were against themselves, like when they were asked who wrote their music and John retorted, “What music?”    Asked by another reporter if they thought they would last as long as Frank Sinatra, Paul quipped, “We should last longer, we don’t drink!”

Someone else wanted to know if the Beatles ever got tired of the press following their every move, “No, if they were with us I’d miss ‘em.  Matter of fact, I miss ‘em when I’m asleep!”  John had answered.

My recollections were interrupted as Ringo summoned Paul to the galley to help make some coffee and a new voice warned George not to take too much sun.

The voice belonged to Bud Dresner, a friendly police sergeant who accompanied the four wherever they went in Miami, frequently offering advice and occasionally steering them as firmly as a manager.

The following night – on the eve of the second nationwide TV appearance on the Ed Sullivan Show- Bud took all four home to have dinner with his wife and children, “We had roast beef – enough to feed an army!” George told me the next morning.

“I like you guys.  I think you’re funny.  Your records are great too, “Bud said.  He was certainly more pro-Beatle than the cop in Washington who stuck a bullet in each ear when the foursome took the stage for their debut American concert.

As we lazed in the sun, George threw biscuits into the sea.  They were snapped up by a pelican, which had been following the yacht for several minutes, oblivious of its famous passengers.
The spot seemed sufficiently isolated for an uninterrupted swim and the Beatles stripped to their bathing trunks, three of them diving into the clear Atlantic together, as Ringo sat astride the rail to photograph the scene.

But it seemed no sooner had they hit the water than several previously unnoticed craft headed toward the “Southern Trail.”

“It’s the Beatles!” someone yelled and, as the boys clambered aboard, the visitors called to them and leveled cameras.  In return Beatles cameras were aimed at the discoverers and the Liverpoplians snapped a few more pics to show to the folk in Bootle before waving back their greeting.

On the way home, the boys stretched out  in the sun, determined to get a deep Florida tan on the trip just in case the opportunity didn’t arise again.