A little while ago I had the privilege of talking on the phone with a first generation fan name Kay.  Kay has had quite an adventure as a Beatles fan because in 1965 she was one of the girls that rented a helicopter that flew over the Beatles' rented house which lead to her and her friends being invited to the Beatles' press conference.

She is allowing me to share her story from 1964 about her experience with Beatlemania.   She is working on a project right now that will go into more details about how experiences.


In August of 1964, Beatlemania was running wild throughout the globe and the effects of it were felt in Los Angeles, California.      The Beatles hadn't been to the west coast as a group  yet and the fans were chomping at the bit to see them.      Radio stations, such as KRLA were playing their music and the release of their first movie,  A Hard Day's Night just added to the excitement.   The Beatles  not only would perform twice at the Hollywood Bowl, but would be spending a few days in a mansion in Bel-Air.


Crafty Beatle fans in the area learned where the house was and tired in vain to get inside the gates.   When they were stopped by police, they returned back to the gates and waited with hopes of seeing the Beatles coming and going. 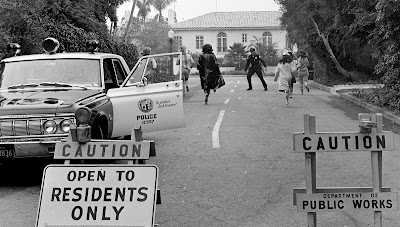 One group of fans that camped outside of the Bel-Air house was a group of girls in the  Beatles Boosters Fan club:  Paula, Kay, Mickie, Sue R., Darlene, Sue S., and Yvonne.    They had hopes that they would see the Beatles and they were in luck at noon when they saw the Beatles limo coming out of the gate.   Not happy with just seeing the limo, the group piled into a 1963 Continental and started to chase the Beatles' limo down the highway.    At one point they were going 83 miles an hour in pursuit of the Fab 4!    And the cops were on their tail with lights flashing, but that did not stop them.
The finally got close to the Beatles car and pulled up next to it.   George Harrison rolled down his window and Mickie threw a scroll that was signed by the fan club into the car!    The girls did eventually get a ticket from the police, but I would say that it was well worth it for that experience!

I am sure there are more details I have left out, but I want to hold off for Kay's project so she can elaborate more.

Here is a photo of the girls in the car with the ticket that appeared in the newspaper. 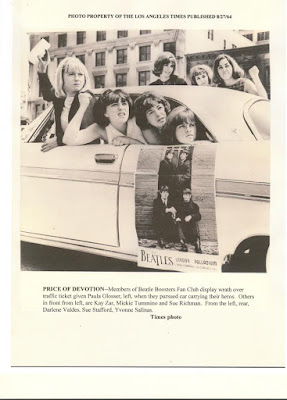 Much thanks goes out to Kay for sharing her story with me and sending me the photo form the L.A. Times archives.
Posted by Sara S. at 11:02 PM