Over on Facebook, a fan named Jim George shared a great story about meeting John Lennon at the Helping Hands Marathon in 1975 and getting John's autograph in 1979.   I asked Jim if I could share his story and photos on this blog and he told me it would be fine to share, so here is his great story of meeting John Lennon.  Thank you Jim!


In May 1975, one of the last official public appearances John made was a three-day radio marathon at WFIL in Philly. During that weekend, he would come out to the parking lot every other hour and sign autographs while station staffers would collect change for the charity. Expecting massive crowds, a friend and I were skeptical that we'd get anywhere near him, but we decided to take the chance anyway and went on the final day, Sunday. 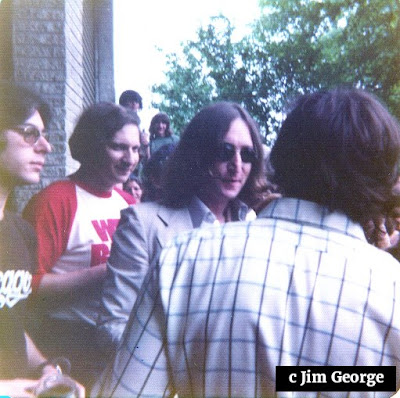 The first time John came out to the lot, which had a railing around it as kind of a buffer zone, I was right near the exit and as he approached the crowd, my immediate response was to extend a hand. He walked straight to me and shook my hand, though he seemed a bit surprised, probably because, as I observed later, most people there merely handed him an item to sign--a photo, a record sleeve, a Rickenbacker guitar. There wasn't a whole lotta shakin' goin' on. Each time he came out, he went around the parking lot twice, so I ended up with four signatures. Foolishly--and possibly due to our low expectations--I hadn't come prepared with any choice memorabilia, only paper: an index card, a manila envelope, two sheets of typing paper. But they're authentic. In his own write. 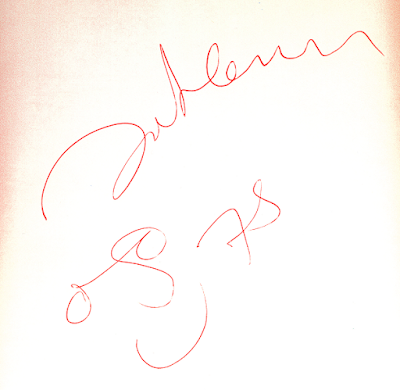 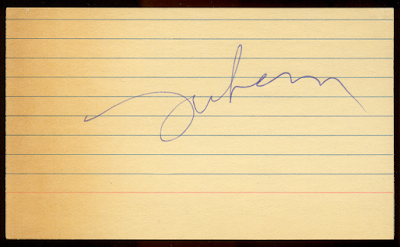 Four years later, I wrote John a letter--beginning "Dear John (sounds so final, doesn't it?)"--and in the course of it, I mentioned having met him at the Philly event:
"I did get to shake your handshake, but I was just another shaky hand in the crowd (the one without warts)."


Also, I enclosed some very early drafts of stories that eventually ended up in my new book entitled Jim Shorts, the style of which has been very influenced by John's book as well as the wordplayfulness of such linguistic masters as James Joyce, Lewis Carroll and Edward Lear. John responded by sending me the autographed bookmark pictured. If he actually read my pieces, that would make him the first person ever to do so. If anyone truly loves his books and the works of the aforementioned authors, I think Jim Shorts would have great appeal to him/her and I would urge you to read more detail about it at:

Jim's 1979 autograph is very interesting because John signed it on a bookmark sent to him by Tony Saks.     You might recall that Tony Saks was the man who owned the "only guitar signed by the Beatles." (although the authenticity of said guitar's autographs is up for debate).     By 1979, Tony was hitting the convention circuits and seemed to have a habit of sending things to the Dakota building.   I own a large envelope from 1985 that Tony had sent to Yoko that ended up in the dead letter office.   How it came to be in an auction is beyond me, but I now have it.    But we can see that Tony sent what I would assume was another packet of information about himself to John in 1979.   When answering fan mail during those days, John would often just sign whatever he had available and send it back to the fan.    And or Jim George, he signed a bookmark that had been sent to him by noneother than Tony Saks.