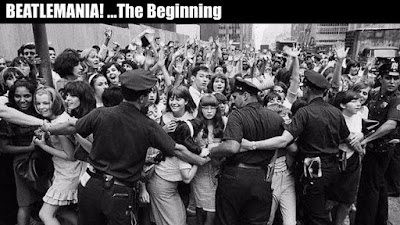 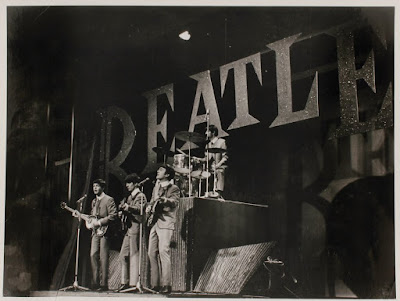 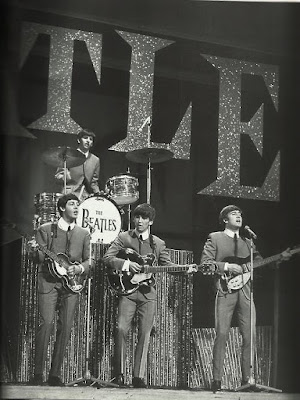 Then the twang of a guitar was heard from inside the theatre....

It was the signal for fifty girls to charge the emergency doors and gate crash a rehearsal of TV's "Sunday Night at the Palladium."

the four Beatles watched as the whooping girls stampeded through the back stalls towards the stage.

Stars, attendants and TV technicians tried to block their way.   Then somebody threatened to use the fire hose on them.

The manager, Mr. David Wilmot, dialed 999.  And as the police ran into the theatre the girls ran out.

The top of the bill Beatles -- John Lennon, Paul McCartney, George Harrison and Ringo Starr were forbidden to leave the Palladium.

Said John, "We were going out for lunch.  Instead we had roast lamb, potatoes and sprouts served in our dressing rooms."

Some were crushed against the stage door as those at the back pushed forward, trying ot hear the beat of the Beatles inside.

Two inspectors, leading a force of twenty sergeants and constables, walked slowly towards the girls.

The twisting, shouting fans stood their ground for a moment then backed away.

The police broke the crowd into small groups and gradually emptied the street.

But the fans weren't finished yet...

Shortly before dusk they were back again brandishing pictures and record sleeves of their idols.

The Beatles who all come from Liverpool, told Palladium chief Val Parnell that they wanted a stroll before the performance.

He said, "I'm not risking letting you out.  It could be dangerous."

So they popped their heads round the stage door to have a look at the fans massed outside.

There was a tremendous screech and the girls flung themselves at the gate just in front of them.

But police helped by a commissionaire, held them back. 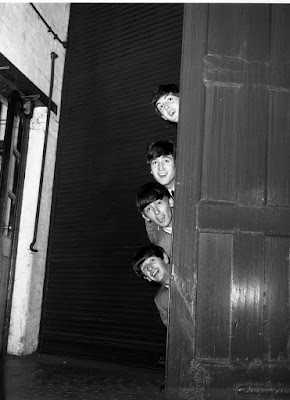