The book 16 in '64 is a cute little book written by Marti Edwards and Joe Carroccio about Marti's experiences growing up in the Chicago suburbs in the 1960's.    Chicago radio station WLS first played the Beatles in February of 1963, and so Marti was lucky to have heard Beatles music before most others in the country and she loved the music and boys so much that she started a fan club called "The Chicagoland Beatle People."    Her club quickly  grew  in popularity and soon Marti decided that she was going to meet the Beatles in person.


You will just have to read about HOW she went about getting to meet the fellows, but it all happened during the press conference during the Beatles 1964 tour during their Chicago appearance.   It is a really amazing story!  I read the chapter of the book while sitting in the waiting room of a doctor's office.   I was literally on the edge of my seat the entire chapter and when the person I was waiting for came out, I made him wait until I was done reading because I just had to finish that chapter.


Marti continued with the club and saw the Beatles in 1965 and 1966.   I wish she had gone into her stories of these concerts as much as she did the 1964 concert.  While she didn't get to meet the Beatles during the other years, her concert stories would have been great to have read in more detail.

Most of the book isn't about the Beatles, but about a girl who was a Beatles fan who was a teenager in the 1960's.   I found it interesting that Marti was 16 in 1964 (as the title states) and that made her a tad bit older than other fans that we have read about.   So her experience was slightly different because she had more freedom than the 12 year old fans we usually read about.    I also liked reading about her growing up in the suburbs.   She painted a wonderful mental picture of what life was like in the early 1960's. 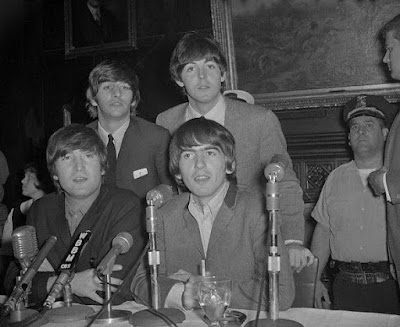 At the end of the book, there was a list of photos and things from 1964.   I felt like this part was just filler and was not necessary, but others might enjoy it.    If someone could explain to me why Mario (as in Luigi's brother) was in the mix, that would be great.

This was a fun little book and made for a quick read.   You can get it through the book's webpage  where you can order a copy of the book OR get the ebook version for just $2.50 (the e-book is $3.00 on Amazon).