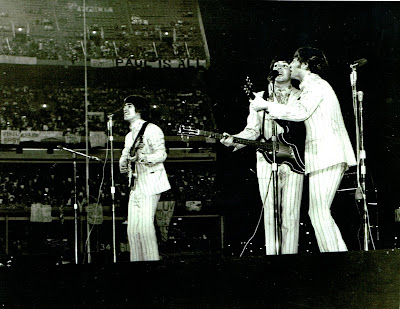 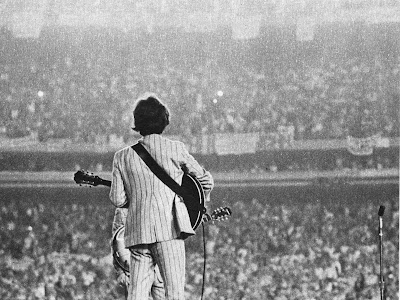 ‘Only’ 40,000 Screech at Beatles’ Stadium show
UPI (New York)
The Beatles visited the home of the baseball’s lowly Mets last night, but it wasn’t one of their grand slam appearances.

In their third New York concert performance, The British rock n roll quartet failed for the first time to pack a full house at Shea Stadium.

Playing their hits for 40,000 fans – a mark topped more than a dozen times by the Mets this season – the Liverpool four had a relatively routine appearance.

Only a dozen youth- including one stopped I his tracks by a policeman’s judo chop—tried unsuccessfully to clamber upon their stage in the second base area of the diamond.

Only 500 police and firemen were on hand to maintain order.  And, according to their estimates, no more than forty teenagers were treated at the scene for hysteria.

The teenagers who burst through the barriers were merely removed from the stadium.  As one policeman explained, “we decided the worst punishment for a fan was to throw him out.”
While two limos decoyed the hundreds waiting outside the Beatles hotel, the rock n roll group was whisked away in a motorcade which had waited beside a back door.

Encased in a Wells Fargo armored truck, the teenage idols arrived at the stadium and were hidden away in safety in the umpires’ dressing room.

The four acts preceding them – the Ronettes, the Cyrkle, the Remains and Bobby Hebb managed to keep the audience attentive.  Then at 9:17pm the Beatles came out.

“We love you John” or Paul or George or Ringo signs waved, the audience stood and began a screech that lasted the entire time the group sang.

A spokesman for promoter Sid Bernstein said the receipts totaled $292,000 and that was enough for the Beatles to be back again for a sell-out performance next year.
Posted by Sara S. at 8:43 PM