"How I almost met a Beatle" 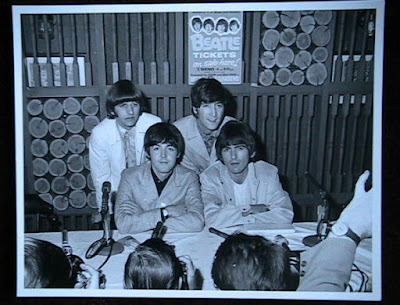 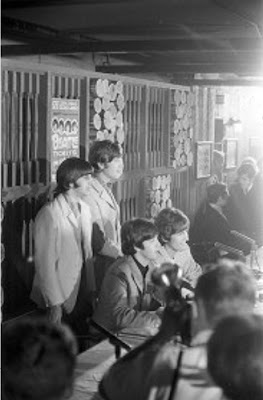 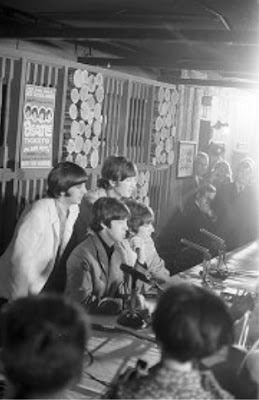 How I almost  met a Beatle

Three young policemen stood beneath the triangular red “exit” light in the Hot Stove lounge of Maple Gardens yesterday afternoon.  They were sweating.  The building was full of screaming teenagers – the first Beatles show had just ended and this room was full of newspapermen.   There were maybe three dozen cameramen, counting both still and movie, and they were pushing each other around, getting the best spot.

On one side of this door there was a photograph of a lot of young faces above the caption “1931 Marlborough Athletic Club, Junior SPA and OHA Champs” on the other side there was a picture of “Ottawa, NHA and Stanley Cup Champions, 1911.”

Suddenly, who burst through this door but Stan Obodiac!  Stan Obodiac is a former pro-hockey player and amateur book author.   He is now publicity man at the Gardens and is in charge of worrying about things like the Beatles.  Stan saw me and rushed over.

“Boy,” said Stan.  “are you ever popular with the Beatles.  They want to meet you.  After that column you wrote today, you’re the only one that want to see.  Usually they just want to see Lyndon Johnson and maybe Princess Margaret – and now you!”

“Right now?” I said.  I tried to look as if I wasn’t excited.  I had heard earlier in the day that John Lennon, the theologian with the Beatles, had read my piece and like it.  “Right now,” said Stan.
He ushered me through the door, between the Marlboroughs and the Ottawas.  “Let this man through” he said to one of the young cops.  I ignored the envious glance of a lady reporter from the “Canadian” and followed Stan down the corridor.  There were two more barriers to pass and each time Stan led me through.

Then we reached, right in the middle of the hockey dressing rooms, The Door, behind which THEY were waiting.  This time not even Stan could get me through.

“Only if Tony says so,” said the copy on the door.  Tony Barrow is the Beatles traveling press agent.  Stand went in alone.  I waited outside.  There seemed to be about twenty policemen within a couple of dozen square yards.

“You’re having a hot night,” I said to the one nearest me.  He was sweating – as by now was I.  “Not too bad,” he said.  “Could be worse.”   That’s something I always forget about policemen.   No matter  how bad things are, they could be worse.  For instance, somebody could be shooting at him.
Finally, Obodiac re-emerged from the Beatles presence, this time with Tony Barrow.   “I’m sorry,” Barrow said, “but, well, it’s just not a good time just now.  They’re edgy and sweaty.  They really appreciated that piece though, especially John.”

I asked if I might have a few words with John.  (I wanted to ask him, in private, whether God was dead and if so what he was going to do about it.)  But Barrow said that though it seemed likely earlier on, it was now impossible.

Dejected, I went back to the press conference.  Soon the Beatles appeared, looking cheerful enough.  The room was packed – 150 people in all, including Pierre Berton and a man from “The News of the World.”  The Beatles answered questions politely, sometimes playfully.

Rev. Gene Young, the hip United Church clergyman, was in the audience wearing his collar.  He had a microphone around his neck because he’s subbing for Larry Solway on CHUM’s “Speak Your Mind” and wanted to pick up some material for his program.    He asked Lennon, in effect, why the Beatles didn’t involve themselves in some kind of protest like Viet Nam.  Lennon put him off gently and George Harrison volunteered that war is bad.   Young then asked what was important in the world.  Lennon said, “love” and so did Harrison.  Young asked what inspired young people and Paul McCartney said, “They get inspired by people who talk honestly to them.”

Nathan Cohen told me that “the one tie I went to a Beatles press conference, the reporters behaved as if they were in the presence of Jesus.”  This was true yesterday, too.  Some replies were cheered by the reporters – many of them, of course, from teenage or college papers.

But in the midst of all the nonsense, I liked John Lennon.  Someone noted that the Beatles had received the MBE’s for helping the British economy; now that the economy was in a mess again, what special plans had they for helping out?  “Well,” Lennon said, “we could give back the medals.”
I liked him best, though, when he talked modestly and honestly, about the songs he and McCartney write.  He was asked about the appeal of his new ones.  He said, “I don’t write them for other people.  They’re only for other people when they’re done, and then you can like them or not.  You have to do them for yourself.”

Spoken like an artist; and, in fact he is an artist.  From most popular songwriters and statement like that would be pretentious nonsense—usually the process of Top 10 writing is strictly manufacturing.  But Lennon’s songs are original and lovely; he deserves everything he has.