Fewer fans and fainter in Toronto 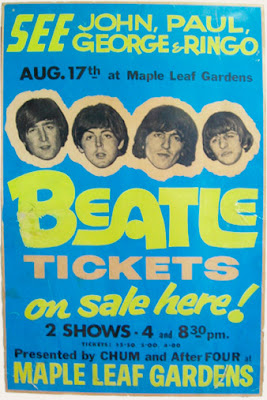 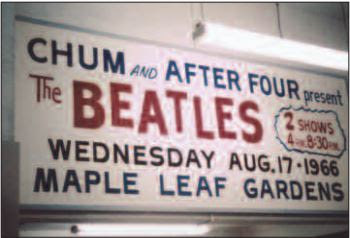 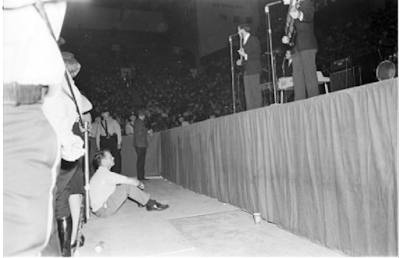 The Beatles fly onto Boston today with 96,000 Toronto dollars, a white-haired troll doll, and unless the staff can get rid of it, a hamster named Brian.

Those were among the souvenirs of their third and dullest Toronto appearance.

It was the dullest by any yard stick:  fewer fans paid to get into Maple Leaf Gardens, fewer milled around the King Edward Hotel, fewer police were needed to handle them and horrors – only half as many teenyboppers fainted from the sheer excitement of it all.

They filled the Gardens last night with 18,000 fans but only 15,000 showed up in the afternoon.  St. John Ambulance workers handled 167 stricken fans compared with more than 300 last year
The 33,000 who did show up created just as much bedlam as usual, drowning out their idols with shrieks and trying to pelt them with paper balls.

At a between show press conference the boys toted one sentence quips on Christianity and Viet Nam to reporters.

John Lennon, trying to clarify his “Beatles are more popular than Jesus” quote told a United Church minister he really wasn’t against Christianity.  “I’d recommend it to anybody –all the people in the world, especially old people,” said Lennon, wearing a pink linen suit.

The group said they supported “the basic idea of Christianity” and George Harrison added that “people who dislike us are not offering a Christian answer to what Lennon said.”

Rev. Gene Young said afterwards he was “amazed and really impressed” with the Beatles as individuals.

On Viet Nam, Lennon said he could see “no reason on earth why anybody should want to kill anybody else.”

“But we can’t say things like that,” piped up Paul McCartney.

“We’re not allowed to have opinions, you might have noticed that,” said Lennon.

The literary Beatle also said anyone who “did not feel like fighting…should have the right not to go into the army.”

McCartney sat playing with a white haired troll doll during the conference, one of a mounting pile of gifts sent to Maple Leaf Gardens and the Beatles hotel during the stay.
Is the Beatle craze ending?

“If our popularity does dimish, we’ll be the last to worry,” said Harrison who wore a fishnet shirt and a brown windbreaker.  “It shows no signs of diminishing.”

Will the group ever break up?

McCartney said, “It will be a bit embarrassing at 35 to be doing the same routine.”

Lennon said, “We do not intend to go on holding hands forever.  It might last, I don’t know.”
But if anyone thought Beatlemania had ended, the fans who swarmed through the Gardens for two shows proved otherwise.  Nearly 300 police officers guarded the building in the afternoon; another 50 were added last night.

The college St. Subway station scene prompted one TTC worker to compare it to the blitz.  Extra subway staff were on hand to keep people from being pushed off the platform and barricades were erected in the station.

Waving signs proclaiming, “I’m Happy!” and “Paul, I love you always!”  the fans lined up from Carlton St. around to Yonge St.

Two Albany, N.Y. teenagers Mary –Ann Scott and Patricia Novak, marched past officers into the Gerdens restaurant, having booked reservations a month ago.   They later infiltrated a press conference held in a nearby room.

A 77-year old Port Hope woman arrived in time for the nighttime show, but tripped on the way to her seat.  After sitting out the early acts at the first aid centre, she got back in time to stand on her chai and watch the Liverpool group.

The noise got so bad at one performance that a hefty cop- one of a barrier in front of the stage – pulled a couple of bullets out of his hoister and stuck I them in his ears.
And twice yesterday there was a thunderclap of voices, as four famous faces half skipped into view earing forest-green mod jackets, charcoal grey slacks and polka dot shirts.

Paper balls, glittering tinfoil and sound tons and tons of adoring screams cascaded onto the stage as the Beatles bopped about in the pool of light.

It went on for just over a half hour—screams interrupted only by louder screams as youngsters stormed the stage or were carried out.

One youth appeared from nowhere and climbed to a front seat, in mid-air , reaching for the platform.  When the crunch came, a dozen officers bore him away.

Last night, a youth climbing over the elaborate backdrop barrier came rolling down yards of bunting and drape behind him.

Dozens of teenagers at both shows went into faints from heat and excitement.  One girl somehow lost her skirt when she collapsed.

As the Beatles finished their show shortly after 10pm, in a windowless room in the depths Of the Garden, staff members fed a hamster pieces of lettuce and mused over what to do with it.
Apparently named after Brian Epstein, the Beatles manager, the hamster was sitting in the Beatles dressing room when they came back from news conference.   No one knows how it got through the scores of police.   A note with a crayon drawn heart says, “This is Brian.  We love you.  Linda and Sue.”

The 65 policemen really didn’t have much trouble holding  back the 200 teenagers as the Beatles returned to the King Edward Hotel by police paddy wagon last night.

The closest the fans got to seeing their idols was the side of the wagon and the clanging of a steel gate at the end of hotel as it drove up to the back door.

One policeman was knocked to the ground as two screaming girls fell on top of him.  Other officers found themselves with sobbing teenybopper in their arms.

A fan wants the hotel made a “national shrine” because it has been the Beatle’s’ sleeping quarters three times now.