Letters From Mum-- A Review 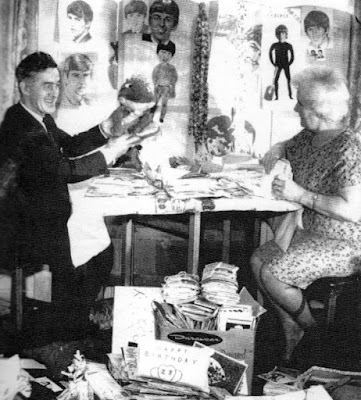 When Louise Harrison mentioned in her book, My Kid Brother's Band that she had plans to release the letters her mother sent to her during the years of Beatlemania, I was thrilled at the possibility.    The senior Louise Harrison is  a much loved figure in Beatles fan history, and she was known for having a great sense of humor and for writing letters.      Many of the letters she sent to fans between 1963-1970 have appeared on this blog over the years.

Letters from Mum is a audio book from George's sister, Louise.    She reads letters that her mother sent to her from Liverpool to her home in Benton, Illinois during the year of 1963.     I really enjoyed this audio experience.    Louise did a great job reading the letters her mother sent her.   Her Liverpudlian accent really added to the mood of the letters and I am glad that it is her voice that we hear and not an unknown narrator.

The letters themselves are very interesting.  In the middle of hearing a mother telling her daughter normal day to day events, you also get to hear about the beginning of Beatlemania through the eyes of George Harrison's mother.    She talks about fans and mania and about going to Beatle concerts.   She also writes to Louise about George's trip to the U.S. to visit her and how Ringo changed his mind and decided to go to Greece instead of the United States.    It was especially interesting to hear what she had to tell her daughter about Brian Epstein and work Louise was trying to do for him (basically---don't promote all of Brian's groups---focus on your brother).

I really liked having Mrs. Harrison's humor shine through.   I had to laugh at the story of how she was trying to sneak things through the airport duty free.

The only part of this audio that I disliked was the last track.    It was not a letter written by Mrs. Louise Harrison, but instead was something sister Louise wrote after her brother's death in 2001.   It was a rambling speech that talked about the Benton house turning into a Bed and Breakfast, Louise's charity, Drop In and seeing her brother for the last time.    I didn't feel like this speech fit in with the rest of the material in this disc.    It really should have been left off.

However, don't let that last track denture you from this treasure.  It can be purchased as a CD for $15 or a digital download for $10.   I bought mine through the itunes store.   You can purchase it directly from Louise Harrison's website as well.