One of the early world-wide rock n roll bands was the Tielman Brothers from Indonesia.     This five member band of brothers started out playing folk  music in their home country in the mid-1940's  and eventually started adding songs that were more rock n roll.  When Indonesia became independent in 1949, the country's first president condemned rock n roll music because of the western influence and the Tielman Brothers took their band to Holland.

By 1959 the band had found a regular gig in Hamburg, Germany and had a big following on the Reeperbahn.   Well I am sure that you know where this story is going.     By the time the five Beatles arrived the Tielman Brothers were playing rock n roll songs in both German and English.  They had cut a record and they truly knew how to "Mach Schau."    The bass player would frequently play his instrument with his teeth, the other guitar players would lay down on the floor and perform among other crazy things.   The audience loved it!

And the Beatles loved them as well.    It has been said that Paul first saw the Hofner Bass being played by a member of the Tielman Brothers, which made him want to play one in the Beatles.    George Harrison is quoted in Rolling Stone magazine when talking about his time in Hamburg about a great performer, "Andy, the Indo man," which was Andy Tielman the leader of the group.


All of this is nice and everything but then tonight I found this amazing photo.    In the 1960 photo, the Tielman Brothers are performing in Hamburg and who do you spot in the audience?   It sure looks like Paul McCartney and John Lennon to me!   What do you think???

Edit:   Alright---so I have been tricked and this has been manipulated to look like John and Paul were in the audience in the photo and it is not legit.    I was fooled.    I spent a lot of time making sure that the Tielman brothers really were in Hamburg at the same time as the Beatles and it never even dawned on me that the photo was a fake.    However--I most likely believe it was made as a fan piece to show what it might have looked like because the Beatles DID see them in concert.    Regardless of the photo (which I am leaving up), it is neat to learn a tiny bit about the other bands that were in Hamburg at the same time as the Beatles. 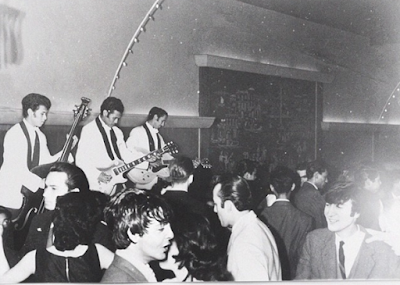