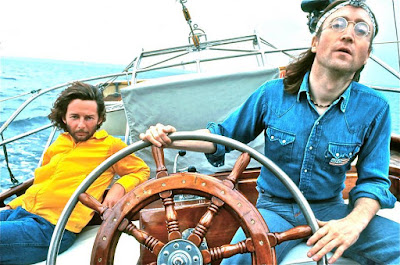 I am sure that most everyone that checks this blog is familiar with Elliot Mintz.    He is an interesting character in the story of John Lennon's life.     He has posted above photo of himself and John on a boat in the 1970's on facebook with this story on John's 75th birthday

i was in new york at a hotel i always stayed in. it had been a late night, so i left a 'do not disturb' on the phone so i could sleep in.
at some unreasonable hour the operator rang and said theire was a man 'claiming to be john lennon on the line and insisting it was o,k, to wake you.'
he sounded excited. 'have you ever been on a sailboat'?, he asked. 'no', i replied. 'i don't know how to swim, so i try to avoid boats'.
'o.k. get dressed. i'll meet you in the lobby in 20 minutes'...and hung up.

a few hours later we were on a rather small boat in new york harbor with a mutual friend. it may have been late 1973 or 4.
he had been taking lessons and was eager to demonstrate his newly acquired nautical skills.
i watched him at the helm. he seemed completely at ease and in control of the vessel. we did not speak much. he was truly 'in his element'' and i did not want to distract him.
we had no 'time limit' or destination.
john approached each of his experiences in life with equal intensity and commitment. it diid not matter if he was making music or baking bread. it all mattered.
he would have been 75 today and so many people around the world are thinking about him and connecting with john in some manner that is 'real' for them.
each memory is meaningful. during his 40
years he gave us so much to remember.
he remains a truly unforgettable man.....
(courtesy: yoko ono)

Since posting this photo, there has been a lot of questions asking if it is a real photo or if it is  photoshop.   I have to agree that Elliot's head looks very strange on the photo--like it was added on later.   As I looked through Elliot's facebook page of photos, I noticed that most of the older photos in his album appeared to have been touched up and worked on in some way.    If you look at this photo from his page of John, Yoko, and Elliot you will see that it too looks to have been worked on.  However, photos often appear to be photoshopped when really it is the lighting in the room, the type of camera used or even the angle of the photographer while taking the photo that makes things look a little different. 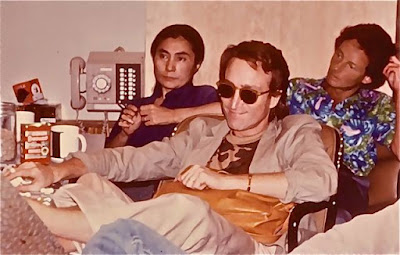 I tend to think the photo is the real deal, however, Elliot may have had some work done on the photo to make himself and John look better.   Why would Elliot Mintz fake a photo of himself with John Lennon when there are lots of photos out there of him and John and we all know they knew each other.   There is no need for him to lie about that.