Here is a wonderful story sent in from a reader, Luis, who met Ringo Starr last week!   What a great opportunity for him!   Thank you so much Luis for sharing your story and photo.   And congratulations on meeting Ringo! 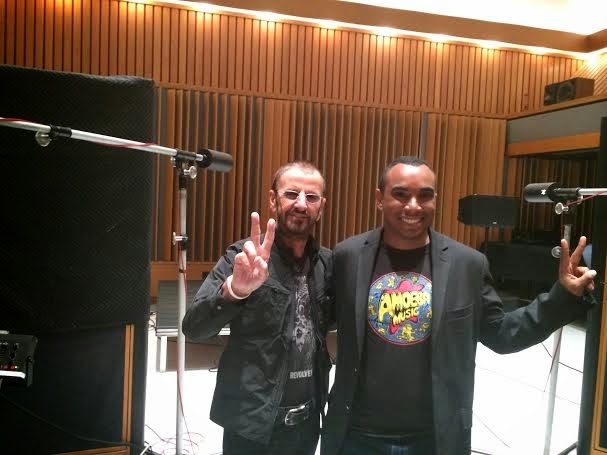 So first off… my name is Luis Lopez, and I have been a Beatles fan pretty much since birth, really. Of all the gifts my parents gave me, the love of the Beatles is one of the ones I will always cherish. A couple of years ago or so, I started working with Chris Carter, who hosts “Breakfast with the Beatles” on 95.5 KLOS in L.A. How I started working with him is kind of a long story, and a story for another time. Anyways, one of the things I had always hoped while working for Chris was that I’d somehow meet either Paul or Ringo . Through Chris, I have had the opportunity to go backstage to a couple of their shows (Paul on Kimmel, Ringo at the Greek), but I didn’t get to see either one of them. I had always figured that that was about as close as I would get to being near one of them. Until today, March 31st.

About a week before, Chris let me know that he was interviewing Ringo because he was promoting the release of his new album, “Postcards from Paradise”. The interview was to take place at the Capitol Records building in Hollywood. Of course, my interest was extremely piqued, and I was allowed to go with him! When Chris told me this, I took the news in a calm and measured way, but when I was drove home that day, I shouted in my car “I’m going to meet Ringo Starr! I’m going to meet Ringo Starr!”
And I eagerly counted down each day leading up to the 31st with almost frenzied excitement. When the 31st arrived, I was calm, yet nervous at the same time.

The drive over to Capitol that afternoon was smooth, given L.A.’s notorious traffic jams. We arrived at Capitol around 1:30 or so. Chris was scheduled to interview Ringo at 2 pm, and he was given about 10 minutes with him. A few other radio hosts were also scheduled to interview Ringo that day, and Chris was the first to have time with Ringo We waited in an upstairs area until 2, and one of Ringo’s assistants came to get us when the time came. The interview took place in Studio A. When we walked in, I caught Ringo in the corner of my eye off in an adjacent studio answering some questions via phone. For the interview that day, the studio was configured with two chairs on one side, and another single chair directly across from those two chairs about 10-15 feet apart from one another. Once 2 pm rolled around, Ringo strolled in, and sees me sitting in one of chairs, saying to me, “Hey Chris!” in a joking manner. Classic Ringo, I thought to myself!

The next 10 minutes were almost a blur. I kept thinking to myself how incredible it was to be sitting across one of the Beatles!

Once the interview was over, Ringo talked to me again and said, “You did a great job sitting quietly during the interview!” Ringo was in a joking and jovial mood that day, which made feel more at ease. I then tried to build up enough courage to ask Ringo for a photo, but Chris asked first for a photo (which I took), and I then I asked for one, which Ringo politely obliged to. It was a short opportunity to have a little facetime with a Beatle, but it’s an experience that I will never forget!
Posted by Sara S. at 8:03 PM