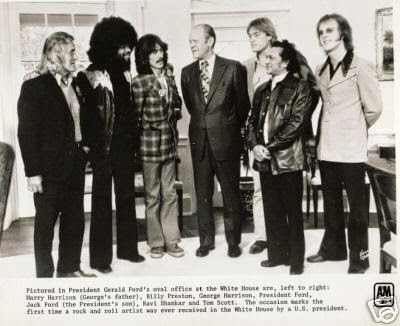 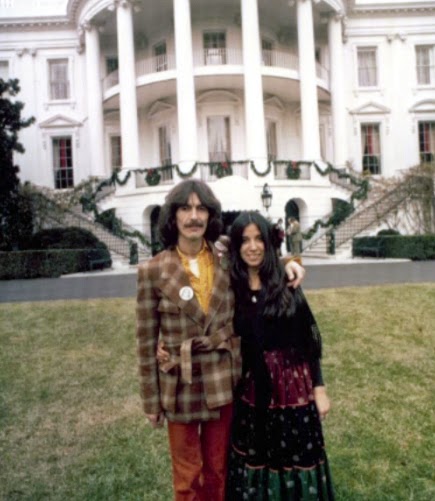 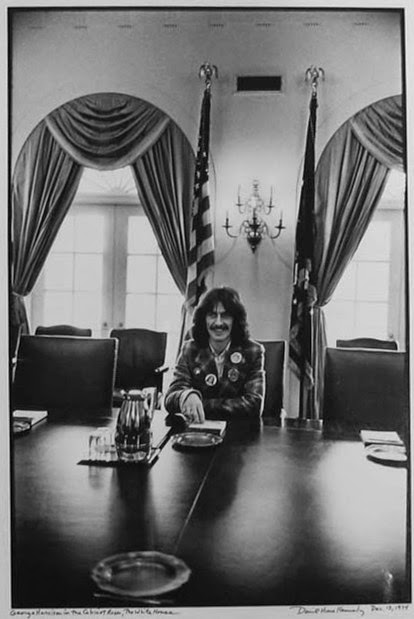 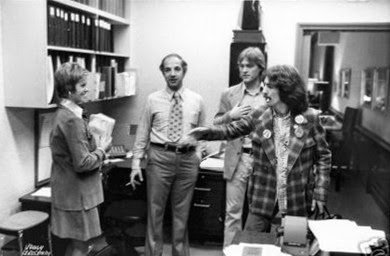 George, his dad Harry, Billy Preston, Tom Scott and Ravi Shankar lunched at the White House on the afternoon of December 13, 1974 at the invitation of President Gerald Ford's son, Jack.  George was the first and only ex-Beatle to visit the White House.

Jack Ford said he invited George and friends to the White House because he had been invited  backstage at the Salt Lake City show.  "They were so hospitable to me I wanted to return the favor," he said.  Ford was attending school at Utah State in 1974.

A lunch of vegetables and beef was served in the solarium while George's Dark Horse album was played in the background.  It was reported George stuck to the vegetables.

After lunch the group had a tour of the White House mansion guided part of the way by the President's daughter, Susan.

Tom Scott recalled they were brought to a conference room outside the Oval Office to wait until the President became available.   "We walked into the presidents' conference room with the oval table and the chair and signs saying, 'Secretary of Defense,' 'Secretary of this and that' and we sat down in the chairs, clowning around."  Scott went on to say that George and Billy did some jamming on a piano in the room, but then it was time to meet the President.

George and the rest of the group met and spoke with President Gerald Ford in the Oval Office for about 20 minutes.  George gave the President an Om button, and in return the President presented him with a WIN (Whip Inflation Now) button.

Commenting on his meeting with President Ford, George said, "He seemed very relaxed.  He was much easier to meet than I would expect.  you can imagine the number of things he's got on his plate."  When asked if the President had heard his work in the past, he replied, "No, he's not all that familiar with my music."
Posted by Sara S. at 8:18 PM